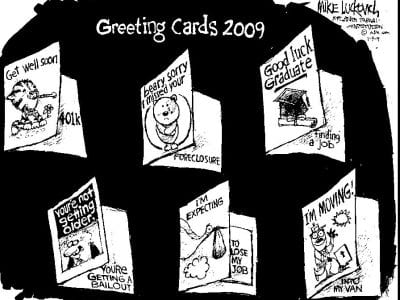 I don’t hate George Bush. I never have. I voted against him twice. I disagree with him, sometimes passionately. I think the country is in worse shape now than it was eight years ago, and that history will not be kind to him. I think America’s standing in the world has dropped precipitately, and that it isn’t just the elites […]

Learning from failures of past

WASHINGTON When Bill Clinton’s health care proposal was foundering in the summer of 1994, a group of senators suggested that the administration put off trying to get universal coverage and insist instead on insuring all children. The idea was to make, at least, a down payment on reform. The White House said no and pressed on with its doomed effort […]

Taxes will be raised, eventually

During the presidential campaign, Barack Obama portrayed his tax plan as a way to help “spread the wealth around.” That was an unfortunate choice of words, though not as silly as the “conservative” formulation that raising taxes “punishes success.” The object of taxation is not to spread the wealth and certainly not to penalize people who make a pile. Stripped […]


To the Editor: I wonder what happened to the custom-made cowboy boots President Reagan presented Saddam Hussein. Did some looter get them and did they fit? Whose collection claims the photo of Rumsfeld cozying up to Saddam back when Iraq was at war with Iran and the Reagan administration was playing both ends against the middle? We’ve had some strange […]

Getting ready for tax season

The holidays have passed us by, the new year has begun, and tax season is right around the corner. The earlier you prepare for the looming April 15 tax dead- line, the easier it will be to file your taxes. Here are some helpful hints as you begin getting ready for tax season. Make sure your information matches ours. Soon […]

The heart wants it, but safety first

Dear Tom and Ray: I am a middle-aged (OK, middle-aged-plus) woman who drives a Mini Cooper S with a manual transmission. I purchased it last year for whatever psychological reasons post-hormonal women do things like that. I love driving it, but it is totally impractical, since I own a sheep farm in Vermont at the top of a hill. I […]

ALL MY CHILDREN — Tad rejected Krystal for her relationship with David. He refused to let her see Jenny, forcing Krystal to take him to court for visitation rights. She took pills before taking the stand, became emotional and spilled the pills in front of everyone. Tad was given full custody of Jenny. David told Zach that Kendall had only […]


ARIES (March 21 to April 19) Romantic aspects are high at this time for single Lambs looking for love. Warm and fuzzy feelings are also at enhanced levels for Rams and Ewes in paired relationships. TAURUS (April 20 to May 20) This week favors what Taureans dote on — namely, love and money. Look for more meaningful relationships for both […]