Elsie Banks is happy to be home after spending a little time in the hospital and Letcher Manor. We are happy for her. Bonnie Combs Craft of Louisville, celebrated her 90th birthday Jan. 3. Howard Brown of Louisville died Nov. 21. He was the husband of Dixie Adams Brown. They have two sons, Greg of Louisville, and David of North […]

In our younger years while we were still at home, Mom gave each of the kids chores to do so we could all help out with the work around the house. Some of us would feed the stock while others brought the milk cow in from the pasture or got in the night’s supply of coal and wood. It really […]

• Remove mineral deposits from shower fixtures by removing them and boiling them in straight white vinegar for 15 minutes. Allow it to cool and then scrub with a brush. Rinse and reattach. • Make a paste of cream of tartar and hydrogen peroxide to remove rust stains from sinks or bathtubs. • “ To keep my preschooler organized when […]


Funeral services for Katherine Marcum, 48, of Litt Carr, were held January 6 at King’s Chapel Church at Whitco. She died January 3. She was buried in Dinah Blair Cemetery at Cowan. Born in Letcher County to Clayford and Dorothy Slone Baker, she was a sister of the late Andrew Baker. She is survived by her husband, Jerry Marcum; two […]

Within an hour of the tragic shooting in Arizona, it had begun. The Blame Game. The effort to score political points. The attacks on the ugliness of the political debate mimic the very ugliness they condemn. The sheriff blamed Rush Limbaugh. Liberal bloggers went after conservative talkers. Conservative talkers lashed right back at the sheriff and the liberal bloggers. Drudge […] 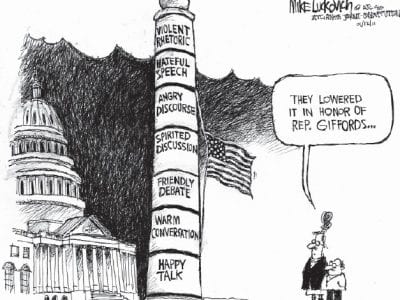 WASHINGTON There is one commentator whose words should enlighten us on the meaning of the shooting of Rep. Gabrielle Giffords and the savage murders that took the lives of, among others, a federal judge and a 9-year-old girl. The person is Giffords herself. In an interview last March, the Arizona Democrat anticipated almost everything being said now and explained why […]

Power from big banks and to the people

Populist banker. Now those are two words you rarely see linked together. But Thomas Hoenig, president of the Federal Reserve Bank of Kansas City, truly is a rarity. Firmly rooted in small town Iowa and Kansas, he has never aspired to be part of the Wall Street-Washington power elite, and he has no hesitancy to challenge their financial orthodoxy and […]


By FROMA HARROP House Speaker John Boehner seemed truly appalled by the murderous rampage against Democratic Rep. Gabrielle Giffords and constituents at a supermarket in her Tucson, Ariz., district. But the Republican’s contention that this was “an attack on all who serve” wasn’t quite right. The apparent gunman, Jared Lee Loughner, may be a 22-yearold loner and is probably insane, […]

Recently, my friend found this posted on her PTA’s website — some friendly tips from the local police department’s “safety expert,” beginning thusly: If you are a parent, you are certainly concerned about the increasing amount of criminal activity directed against children of all ages. From assaults, molestation and kidnapping of very young children, to brutal muggings, daterape and murder […]