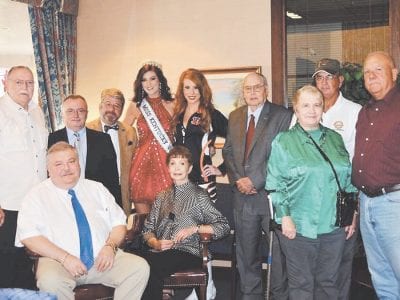 
“Letcher County: Where the Highest of Dreams Begin” was the theme for this year’s Mountain Heritage Festival, and 12 former and present Letcher County residents were honored before the festival parade Saturday for having achieved their dreams in their chosen areas of expertise. Among those honored were (seated) Edison G. Banks II, Dr. Shelba Proffitt, (standing, from left) Dr. Billy […]

The Jenkins City Council has voted unanimously to remove a surcharge on food sold by restaurants that also serve alcoholic beverages. The council voted to remove the words “and food” from its Alcoholic Beverage Control (ABC) ordinance during a special meeting held September 25. The move came as a result of the issue being raised in the council’s regular meeting […]


The Letcher County Grand Jury named 12 people in 14 indictments reported out September 23 including a former Whitesburg Middle School secretary and bookkeeper. The grand jury charges Peggy R. Cook, 49, of 1734 Smoot Creek Road, Isom, with failure to make required disposition of property valued at $10,000 or more. She is accused of taking at least $10,000 in […]

Our first price hike in 18 years


The Mountain Eagle is having its first price increase in more than 18 years. Beginning with the October 8 edition of the paper, single copy sales will increase to $1 from 75 cents. The price of a local one-year subscription will increase from $29.50 to $33.50, while a yearly out-of-county subscription will rise from $36.50 to $40.50. The Eagle’s staff […]

The Letcher County Central High School Cougars traveled to Somerset and defeated the Briar Jumpers 42-26. The ejection of LCC Coach Mike Holcomb sparked his team to a 28-point lead in the third quarter after a halftime deficit as the Cougars improved their record to 4-2 for the season. Letcher Central received the opening kick and on their first play […] 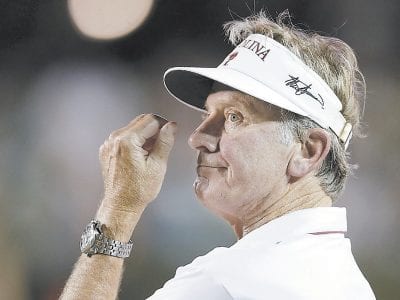 Steve Spurrier believes South Carolina can still win the Southeastern Conference, so he wants his Gamecocks to quickly regroup from their stunning loss to Missouri last week. The coach said the SEC’s East Division is full of good teams — including the Kentucky team the two- loss Gamecocks face this weekend — but no dominant one. “If we can start […]

When the checkered flag waved Sunday signaling the end of the AAA 400 at Dover International Speedway, four drivers were eliminated and the remaining 12 realized that the level of competition for the next round of three races suddenly got tougher. Those moving on now find themselves in a field of drivers who have dominated the series for the bulk […]

At last it is early fall and some of the best crappie fishing of the year is very close, with several lakes already having good reports. Lakes such as Cave Run Lake near Morehead are doing well and I have had reports of several good crappie being caught recently. One crappie over 15 inches and close to two pounds was […]

Hunts deer, but not a deer hunter

As I sit on my porch today lost in my memories of days gone by, the thought came to mind, “Your bear hunt to North Carolina is in two weeks.” Gone are the days when I almost lived in the woods, and it was just a few short years ago that is where anyone could find me this time of […]