’07 a year of firsts for Breeders Cup

When Ben Gish asked me to write a couple of Breeders Cup columns for the readers of your community’s fine newspaper, it just so happened that I was about ready to go to Pikeville College to talk to some communications students about journalism, politics and sports.

The meeting last Friday went exceedingly well, at least from my perspective. The classroom was full and the students were attentive. They asked good questions, and I was especially pleased to see that many had a passionate point of view, one way or the other, about mountaintop removal and strip mining.

Personally, I hate mountaintop removal. Once God’s work is gone, it can never be replaced. Surely there must be better ways to extract coal. But that’s a column for another day. Today we’re talking about thoroughbred racing and the Breeders Cup.

After my talk with the students, President Hal Smith treated me to a wonderful lunch in the cafeteria and I got to visit with Kelly Wells, the personable and energetic Pikeville College basketball coach who will take his Bears to Lexington for an Oct. 31 exhibition game against the Kentucky Wildcats. 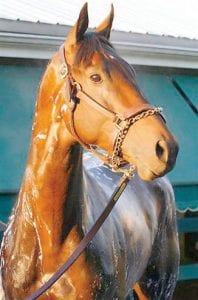 BREEDERS CUP WINNER? – Kentucky Derby winner Street Sense, pictured here getting a bath following a workout before the Preakness Stakes race, will be among the favorites in the Breeders Cup Classic next week. (AP Photo/Garry Jones) ’07 a year of firsts

The coach said he had no illusions about the outcome of the game, but he was grateful to UK and Athletics Director Mitch Barnhart for sharing their big stage with the Bears. If the game draws the anticipated full house of 23,500, I wonder how deep into the season Pikeville will go before it matches that number in total attendance.

From the gym I was taken to the Pikeville OTB parlor so I could see the facility and wait for my friend Bill Malone, a native of Allen and member of the college’s board of trustees, to pick me up for the ride back to Louisville.

I was pleased to see that the facility, while not opulent, was clean and functional. It had ev- erything a horse player needed – television sets, track programs, betting machines, handicapping desks, and restrooms. Snacks and drinks, both hard and soft, also were available.

I had time to watch and bet on three races from Keeneland. In the interest of full disclosure, I didn’t cash a ticket, so you readers might keep that in mind as you consider my Breeders Cup picks, which will be delivered in next week’s column.

Like past Breeders Cup sites such as Gulfstream Park in Florida, Arlington Park in Chicago, and Lone Star Park in Dallas, Monmouth has had to add some seating in order to handle the huge Breeders Cup crowds. I’m sure there will be some glitches – there always are, the first time a major sporting event is held anywhere – but I commend the Breeders Cup for allowing the smaller tracks to have their day in the international spotlight.

Handicapping the Breeders Cup always is a horse player’s dream – or nightmare, depending on your point of view – because the races bring together horses that have been running all over the world, on different surfaces, under different conditions, against different competition. To be honest, throwing darts at a Racing Form probably will produce as many winners as the most astute handicapping.

The answer is … it’s anybody’s guess. To some horses, the surface seems to make little difference. They run the same on anything. But to others, a chance from one surface to another has a distinct impact. For example, consider Street Sense, who earlier this year won the Kentucky Derby. He got beat on the polytrack surface at Keeneland in the Blue Grass Stakes, but came back to romp on the natural dirt at Churchill. In his last start, he finished second to Hard Spun on the polytrack at Turfway Park. But now he’s returning to dirt, his favorite surface, at Monmouth for the Breeders Cup Classic.

From the outside, it looks as if trainer Carl Nafzger is employing the exact same strategy for the Classic that worked so well for him in the Derby. But will Street Sense like the dirt at Monmouth as much as he does the dirt at Churchill?

I enjoyed my visit to the Pikeville OTB parlor, even if I did leave a few dollars behind. On the way home, I wondered if Pikeville might ever support a full-scale “racino” (a facility that combines racetrack betting with slot machines and other casino games). The city may have the chance to decide if Steve Beshear is elected Governor and convinces the General Assembly to let the public vote on casino gambling in a statewide referendum.

But that’s another column for another day. Next week we’ll give you our Breeders’ Cup picks. We advise you to bet them at your own risk. Parental guidance may be necessary.

Billy Reed is an award-winning writer whose work has appeared in The Courier-Journal of Louisville, the Lexington Herald- Leader, and Sports Ilustrated magazine.