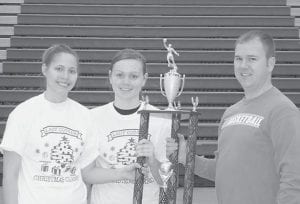 The Letcher County Central Lady Cougars won 14 straight games recently, including the championship of their own holiday tournament. Here, seniors Brittany Sexton and Shannon Bays were presented with the championship trophy by Whitesburg attorney Jamie Hatton, who sponsored the tourney as part of his candidacy for the office of Letcher County Attorney. Sexton is the newest member of the LCCHS 1,000 point club.

To say that the last 10 days have been tough on the Letcher County Central Lady Cougars is an understatement, said to coach Dickie Adams. During this stretch, LCCHS has seen its 14-game winning streak and No. 24 state ranking go down the drain.

“We played perhaps our best half of basketball in winning (52-49) at Montgomery County (on Jan. 16),” said coach Adams, “and then we come back and go to Perry Central (Jan. 18) and we just quit playing defense. (PCCHS) shot something like 75% against us and right in front of the goal. They broke us down off the dribble right, left and every way.

“Then we go over to Knott County (Jan. 23) and we stand around some more and don’t play defense. We’ve stopped guarding anyone. Here, tonight, we made bad decisions and bad choices that led to turnovers and, when we got close, we couldn’t finish by making shots.

After going 0-3 against the top four teams in the 14th Region, LCCHS now has a fourgame home stand over the next two weeks against very beatable teams. The Lady Cougars host Hazard (8-5) on Saturday night. The Cordia (0-12) game has been switched from Feb. 1 to Feb. 5 as part of Senior Night. The Lady Cougars host Estill County (5- 10) on Feb. 6 and then will seek revenge against Knott County Central (12-4) on Feb. 10.

There were seven lead changes in the first quarter before the visiting Lady ‘Cats, led by All-State sophomore guard Kendral Noble, turned back numerous LCCHS efforts the rest of the game and extended the Lady Cougars’ losing streak to three game and dropping LCCHS’ record to 16-4.

Breathitt County, in addition to taking advantage of numerous unforced LCCHS turnovers, shot the lights out, especially in the first half – when they converted 12- of-17 field goal attempts for 71%. BCHS “cooled off ” in the second half and finished with 23-of-40 from the field for 67%.

LCCHS finished a respectable 21-of-56 field goal shooting for 38% and stayed in the game by out-rebounding the Lady ‘Cats 34-22 with Shannon Bays and Brittany Sexton claiming nine each.

LCCHS finished with just 14 turnovers but nearly half came at crucial times when it appeared LCCHS would reclaim the lead. BCHS was guilty of 13 turnovers.

LCCHS, led by sophomore guard Erica Meade, led for the final time at19-18 with just over a minute left in the first quarter only to see Noble score BCHS’ final six points for a 24-19 lead.

LCCHS cut the Lady Cats’ lead to 32-31 with just over a minute left in the first half but back-toback baskets by Noble pushed Breathitt County’s lead to 36-31 at the break.

Breathitt County ran off 11 unanswered points to open the second half and extended their lead to 47-41. Senior center Eden Keeton then went to the bench with four fouls and LCCHS, led by senior forward Brittany Sexton, went on a 12-4 run over the final minutes to cut their deficit to 51-43 heading into the final quarter. LCCHS rallied down the stretch to close to within 52-48 but errors and missed shots allowed the Lady ‘Cats to hang on for the win.