10 years of teaching how to play mountain music 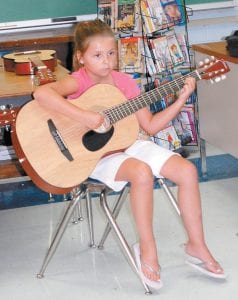 TUNED IN — Madison Baker, 7, listened to an instructor at the Cowan Creek Mountain Music School at Cowan Elementary School. She was one of 161 students who learned how to play traditional mountain music last week.

When Beverly May traveled to Ireland more than a decade ago to learn how to play fiddle, she observed older musicians teaching children there how to play music and wanted to apply a similar concept in Letcher County.

After Cowan Community Center had hosted a series of successful day camps, organizers decided to have a camp centered around mountain music. Seventy-five students participated in the first day camp, which was held with the help of Appalshop and the Letcher County Board of Education. May said organizers were impressed by how much students enjoyed learning how to play musical instruments and decided to make the camp a yearly event.

“This music reconnects us to our roots,” said Stacy Dollarhide, who works with the Cowan Community Center. “ The purpose is to pass on these traditions of mountain music and cultures.”

Now in its 10th year, the Cowan Creek Mountain Music School attracted 161 students ranging in age from seven years old to senior citizens who spent the week at the community center and Cowan Elementary School learning how to play music. 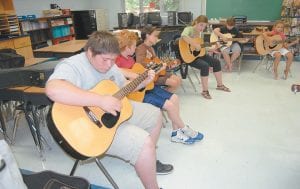 “With the music school you bring out the people who are interested in this stuff,” said John Haywood, faculty coordinator of Cowan Creek Mountain Music School. “The teachers are for the most part Kentuckians who have learned the music firsthand by people in the community.”

The school offers courses in banjo, fiddle, beginning and lead guitar, old-time string band and singing. Instructors with the music school talk about different styles of music, and how some styles have changed and others have stayed the same.

Arts and music classes for children ages five to 10 are also offered in a program called “Kids on the Creek.”

“It has completely exceeded my fondest hopes,” said May. “The kids get a reason to be proud of where they are from and proud of their culture.”

Haywood said the school gives participants a sense of pride in the area and a greater appreciation of their heritage.

“ When I was younger I always wanted to leave,” said Haywood. “I thought opportunity was elsewhere.”

Haywood, who moved back to eastern Kentucky about four years ago, admits he was wrong.

“It’s one of the richest places in the world in terms of music and folk culture,” he said. “You have to have programs like Cowan to keep it going or it will be lost.”

Haywood said through playing music and learning about the history behind the music he has gained a sense of appreciation for the area.

“I learned to appreciate everything in eastern Kentucky,” he said. “I think the music is a big catalyst for that.”

May is proud that some former students of the program came back this year to teach others how to play music.

She said the music school has helped to increase the number of people who are interested in playing fiddle.

“When I started to play I only knew three old-time fiddlers in eastern Kentucky,” said May. “Now you can’t go outside without getting hit by a fiddle bow.”

Through Cowan Creek Mountain Music School came the Letcher County Passing the Pick and Bow Program, which is an afterschool program.

“We have families who are engaged all year round,” said Haywood. “It has been a good thing for families. Mom, dad and kids are learning to play music together. It really strengthens the ties.”