100-year-old vet is awarded the French Legion of Honor 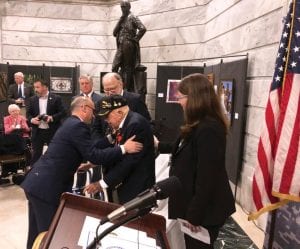 French Consul General Guillaume Lacroix, left, embraces retired Lt. Col. William Pollard after awarding him the French Legion of Honor on Monday in Frankfort. Pollard is a 100-year-old World War II veteran who lives in Kentucky. He was part of the Allied invasion of France in 1944. (AP Photo/Adam Beam)

The French government on Monday awarded its highest honor to a 100-yearold Kentucky man who fought in World War II.

Retired Lt. Col. William Pollard was awarded the French Legion of Honor during a ceremony at the Kentucky Capitol. Consul General of France Guillaume Lacroix pinned the medal on Pollard, calling him “a true French hero.”

“ You owe so much to America’s greatest generation,” Lacroix said. “The American people changed everything … Without this gentleman, my flag would not be flying. It’s as simple as that.”

Pollard was 25 in 1944 when he landed on Omaha Beach, the code name for a portion of shoreline during the Allied invasion of German-occupied France. As was one of the first soldiers to arrive, his job was to deploy concrete caissons that would form a temporary harbor to help soldiers rapidly load cargo onto the beach.

Pollard’s son, William Pollard Jr., said his father helped rescue 14 soldiers from a caisson after it was hit by enemy fire. Pollard said his father and a sergeant got the men safely to shore, having to coax some soldiers who were frozen with fear at the prospect of jumping into the 40-feet-deep (12-meterdeep) water.

“You represent the best of Kentucky,” Grimes said.

In a written statement read by his son, Pollard Sr. said he was honored to receive the award, thanking his late wife and the soldiers he served with.

“Today I am both happy and sad,” he said. “My thoughts today are with her and with my comrades from many years ago.”

The Legion of Honor was founded in 1802 by Napoleon, the French emperor. Today, Guillaume said it can only be awarded by the country’s elected president.

Pollard was born and raised in Lockport, Kentucky, a small town along the banks of the Kentucky River. He had an extensive military career, which also included running an orphanage in Korea near the end of the Korean War. Pollard Jr. said his father never spoke much about his war experience until 1994, during a trip to France to commemorate the 50th anniversary of the Normandy invasion.

He said several people who knew his father said he should be nominated for the French Legion of Honor. He said it took about 15 months to get it approved.

“It’s a wonderful culmination of a lot of my questioning,” Pollard Jr. said.