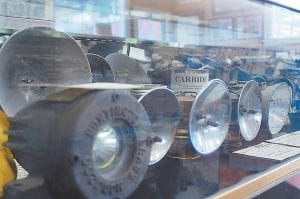 Mining lamps that were fueled by carbide are among the many historical items on display at David A. Zegeer Coal- Railroad Museum as the City of Jenkins prepares to celebrate its 100th birthday. (Photo by Marcie Crim)

With the City of Jenkins celebrating its centennial this year, there is much to learn about the town’s history and the David A. Zegeer Coal-Railroad Museum is a good place to begin.

In the fall of 1911, Consolidation Coal Company purchased 100,000 acres of coal lands in Pike, Letcher and Floyd counties from the Northern Coal and Coke Company. A site was selected for a town to be named in honor of George C. Jenkins, one of the leading citizens of Baltimore and a director of Consolidation Coal. By the time Jenkins was incorporated in 1912 — containing the communities of Dunham, Burdine, Jenkins and McRoberts — construction of the town was booming.

Consolidation Coal built Elkhorn Lake to supply water to run the turbines in a power plant. The company constructed several businesses to serve the new residents of Jenkins — a bank, grocery store, sawmill, brick plant and a hospital that was built in 1915. Also built were a bakery, drug store, post offi ce, jail, hotel, recreation center, churches and schools. 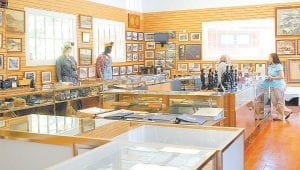 Jenkins was a town built to serve one purpose — to mine the “Cavalier” coal that was to become known as the best coal in Kentucky — and its history is on display at the Zegeer Museum located on Main Street in the old train depot.

The museum is named in honor of a former employee of Consolidation Coal and its successor in Jenkins, Beth-Elkhorn Coal Corp. Zegeer joined Consol in Jenkins in the late 1940’s. When the company sold its Letcher County operations to Bethlehem Steel in 1956, Zegeer became division superintendent. He retired as manager of Beth-Elkhorn in 1977.

In 1983, Zegeer was confi rmed as Assistant Secretary of Labor for the U.S. Department of Mine Safety and Health Administration (MSHA) in 1983, until retiring in 1987. According to Lois Greer, the current curator of the museum, Zegeer was, “a company man, but he really cared about the people in this community.”

Zegeer also became interested in the history of Jenkins, and in conjunction with another resident of Jenkins — Marshall Prunty, president of Roberts and Schaeffer Co. — compiled a videotape of the history of Jenkins based on 145 photographs taken during the years of 1911 through the early 1930s and various publications and interviews with some of the oldest living residents. The documentary, entitled “Birth of a Mining Town, Jenkins, Ky.,” is available for purchase at the museum.

Many pieces of Jenkins history can be found at the museum, from photos of the town’s construction to various examples of mining equipment — everything from hard hats to breathing devices, dinner buckets, head lamps and more. Also on display is the sword of “Bad” John Wright, also known as “Devil John,” an infamous former resident of Letcher County. Many of the exhibits in the museum are on loan from current and former residents of Jenkins.

Lois Greer is a friendly woman who has called Jenkins home for many years. She loves to talk about the history of the town and tell stories of the people and buildings that once called Jenkins home. She’s more than happy to walk visitors through the various rooms at the museum, pointing out photographs that show coal camp houses, community centers that no longer exist, and grand buildings that were later taken by fire. She said attendance has been down at the museum lately, but she expects it will pick back up come August when the celebration begins in earnest.

As Jenkins prepares to celebrate its 100th birthday, the museum is the perfect place to dive in and begin exploring the history of coal mining in Letcher County. You can leave with DVD’s to watch at home, folk-art made from lumps of shiny black coal, and postcards showing photos of the town’s construction and subsequent boom years. You’ll also walk out with enough knowledge to make you want to start “Googling” the history of Jenkins to find out more.

Jenkins is a proud town with a singular story to tell — a story of building a town from scratch, digging it out of the earth to be settled solely for the purpose of mining coal.