101-year-old school will be senior housing 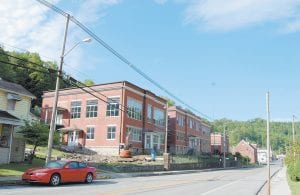 The old Jenkins High School will soon become Jenkins School containing apartments for senior citizens, a senior citizens center and a television studio for the government channel. Completion date is projected to be November.

A 101-year-old school building located in downtown Jenkins is undergoing major renovations and will be converted into apartments for senior citizens, a senior citizens center and a television studio.

Lexington- based AU Associates entered into a 50-year lease agreement in February with Letcher Fiscal Court to preserve and use the old Jenkins High School, located on Main Street.

Construction costs of the renovation are estimated to reach $3.1 million, according to Johan Graham, director of development for AU Associates.

Construction began in mid-March and the project, which will be called “Jenkins School,” is scheduled for completion by the end of November.

Jack Potter, project superintendent for AU Associates, said the trusses are in good shape and have been left intact. Ten units of housing have been framed.

Potter said AU Associates, which has preserved more than 20,000 units of housing nationwide, is trying to restore the old school building and keep it in as much of its original state as possible. 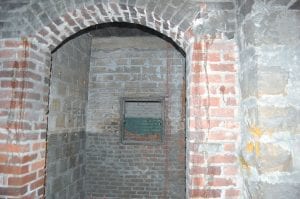 This basement archway space will be cleaned but its use has not been designated. (Photos by Sally Barto)

“We’re saving as much of the old hardwood floors as we can and we’re refinishing those,” he said.

All old chestnut wainscot and trimming is being saved and reused on the main floor. The old scoreboard in the gym will be left intact. The old archway in the basement will stay.

The 40,639-square-foot building is made up of five levels. The_ senior citizens center and TV studio for the Letcher County Government Channel will take up 4,796 square feet. Twentysix apartments will occupy 20,682 square feet. The remainder of the building is hallway and circulation space, said Graham.

Apartments, a mechanical room and an unassigned area will be located in the basement.

The old gymnasium/auditorium area will house the new senior citizens center. AU Associates will install a commercial kitchen for the center. The channel 98 studio will be on the old stage in the gym.

In addition to the basement, apartments will be on the third, fourth and fifth levels.

Letcher County Judge/ Executive Jim Ward said he called AU Associates after learning the company had completed a similar preservation project in Jackson County. Ward wanted AU Associates to transform one of the old schools owned by the county into affordable housing. Jenkins, Kingdom Come and Campbell’s Branch schools were considered for renovations.

“That way the county wouldn’t put any more money into it,” said Ward. “I think with what we are doing with it now we will save the building and it will be useful for seniors.”

Ward said once completed the building will have a positive effect on the community.

“It gives it a very useful purpose,” said Ward. “It preserves our building. It helps our seniors. To me, it’s an all around win situation.”

A group of community members have been trying to save the old high school building from being torn down since 1992.

“Rosemary Shook started efforts to save it,” said Charles Dixon, former Jenkins mayor. “She started taking up pennies, and nickels and any money people would donate.”

“The committee raised over $30,000 themselves to try to save the building,” said Dixon.

The committee had five workdays in the late 1990s, Dixon said, where volunteers “cleaned, shoveled and carried.”

“ There was so much taken out the county sent a backhoe with dump trucks to take to the landfill,” said Charles Dixon, who was graduated from Jenkins High School in 1959.

Coal severance money was allotted when Paul Patton was governor. The funds were used to purchase a roof, windows and elevator. Mold and asbestos was removed from the basement. Three porches were repaired and one was entirely replaced. Drainage work was done to the back of the building and heating and cooling units were repaired.

“Our vision was we were trying to move the school board and City Hall in there,” said Dixon. “To get in there some college classes and maybe a bed and breakfast. We had a lot of plans for it. The bottom line is money and we just didn’t have the money.”

The middle portion of the building, which contains the gym, auditorium and classrooms underneath the gym, was completed in 1912. The left hand side toward Burdine was finished in 1924. The right side of the building positioned near Jenkins Methodist Church was built in 1923. The school began as a grade school and high school was added in 1917. The first graduating class was recognized in 1923. Five seniors were in that class.

The current JHS building was completed in 1971, and classes were held in the new location in January 1972.

The Jenkins school board owned the old high school building and used part of it for administrative offices until the mid-70s. The fiscal court bought the building in 1977, and the school board stayed there until the 1980s and then moved to what is now Jenkins City Hall.

Jenkins Head Start was located in the portion underneath the gym until the early 90s. The senior citizens center had been sited at the old high school building until the beginning of this year when renovations began.

“I’m real pleased,” said Dixon. “I’m so enthused about this. It’s wonderful to think we’ll be able to use it again.”

Dixon said the old building had a lot of potential.

“It’s just a building that needed to be saved,” said Dixon. “You have a lot of memories made in high school.”

People interested in leasing the apartments, can call 859-233-2009 for preliminary applications.

“I’m so glad they are doing it,” said Jenkins Mayor G.C. Kincer. “It’s going to be wonderful.”