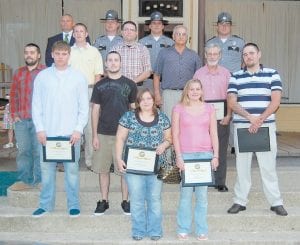 At least two young men who took part in an 11-week citizens’ police academy learned about the diff erent roles of state police officers and saw if that is a career path they may be interested in pursuing.

Stevie Terry, of Knott County and Jordan Gay, of Perry County, both 19, said they are now more serious about becoming police officers after attending the citizens’ police academy. Terry is interested in crime scene investigations while Gay is leaning more toward special response and hazardous material teams.

Residents from Letcher, Knott, Leslies, Perry and Breathitt counties met at the Kentucky State Police Post 13 in Hazard once a week for the past three months to learn about the daily duties of police. A graduation ceremony honoring 11 participants was held at the Highlands Winery in Seco on June 15.

During the class, participants listened to troopers, detectives, undercover investigators and commercial vehicle enforcement officers talk about some of their experiences while working for the state police. Traffic stops, mock crime scenes, forensic science and polygraph testing were part of the class. The group also learned about the role of a special response team in an emergency situation.

“I think this is a worthwhile thing, something we probably should have been doing for a long time to let people know what we do, ” said Tony Watts, KSP public affairs officer.

KSP Post 13 Captain Scott Miller said the citizens’ police academy gives police and citizens a chance to interact and learn from each other.

“It gives a better perspective of what the community sees,” said Miller, during the graduation ceremony. “You all are the eyes and ears of the community.”

Watts said another citizens’ police academy will be held later this year and those interested in participating can call him at (606) 435-6069.