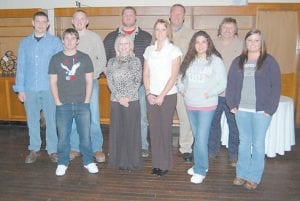 Mike Harris says he is a better citizen after participating in an 11-week citizens’ police academy.

Harris, a member of the Letcher County Board of Education, is one of 11 Letcher County residents who met at the Kentucky State Police Post 13 in Hazard once a week for the past three months to learn about the daily duties of police.

“You really put a face with the men and women of the Kentucky State Police,” said Harris. “It’s probably been tenfold what I imagined it to be.”

Harris said the citizens police academy is a way for the state police to build community relations and let the public see the diff erent job aspects of the agency.

During the class, participants listened to troopers, detectives, undercover investigators and commercial vehicle enforcement officers talk about some of their experiences while working for the state police. Traffic stops, mock crime scenes, forensic science and polygraph testing were part of the class. The group also learned about the role of a special response team in an emergency situation. 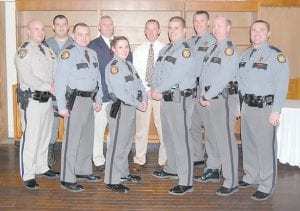 “Things like this are good because we can share with others the way we live,” said KSP Colonel Mike Sapp.

KSP Post 13 Captain Scott Miller said the citizens police academy gives police and citizens a chance to interact and learn from each other.

“It was a good opportunity to learn more about the people in the community and develop relationships with them that can only lead to better policing,” said Miller. “We wanted to open ourselves up to show what we are and explain what we do.”

Sapp said the state police is a community-oriented department that is seeking input from those for whom they work on a daily basis.

“You have a vested interest in your community,” Sapp told the participants at a graduation ceremony on Jan. 19 at the Highlands Winery In Seco. “We’d like to keep you involved in our organization.”

Sapp said it is important to talk with people on a one-on-one basis.

Renee Campbell said the police were a great inspiration.

“It’s just given me a great insight for what (police) do,” said Campbell.

Harris said the state police have a passion for what they do.

“Their goal is to keep Kentuckians safe,” said Harris. “They put themselves in harm’s way for the Commonwealth of Kentucky every day.”

Watts said another citizens police academy will be held this year and those interested in participating can call Watts at (606) 435-6069.