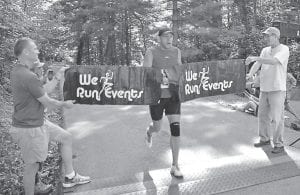 Brandon Gayheart, 40, of Perry County, won the race that spanned 13.1 miles. PMTC President Shad Baker and board member Paul Hopkins are pictured at left and PMTC board member Bill Ramey is on the right. (Photo by Jeremy Williams)

Organizers of a half marathon on Little Shepherd Trail say 111 runners finished the race Saturday.

Participants traveled from Illinois, Tennessee, Indiana, Ohio and Kentucky to run in the Master of the Mountain Half Marathon Trail Race on August 24. One runner, who attends the University of Kentucky, is from Spain.

“ If a lot of different groups would work on similar things scattered throughout the year, it would make a tremendous difference on the finances of the county and the volume of tourists,” said Shad Baker, president of The Pine Mountain Trail Conference.

He said the event is another way to encourage fitness and bring in tourism.

The course started at the parking of the viewing area atop Pine Mountain (US 119) near Whitesburg. The race spanned 13.1-miles on a one-lane, paved trail to Kingdom Come State Park.

Most marathon runners are used to flat courses and the one on Little Shepherd Trail included ups and downs which challenge runners, said Baker.

“That actually attracts people,” said Baker. “They like the challenge.”

Baker said most half marathons go through neighborhoods and towns. This race is unique because it is mostly in a wooded area with scenic views.

All finishers received a medal. Baker said out of 112 participants only one did not complete the task.

“They also said the metals were among the prettiest they had seen,” he said.

Baker said he received positive feedback from participants, four of whom are avid half marathon runners. He was told by participants that they should expect to see many more enter the race next year.

The National Guard and Pine Mountain Search and Rescue assisted with the event.

“They did a phenomenal job,” said Baker. “We couldn’t have done it without them. They were a tremendous help.”

Trey Narramore, of Whitesburg, spearheaded the event as a fund-raiser for The Pine Mountain Trail.