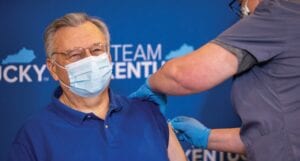 KENTUCKY SUPREME COURT Justice Samuel T. Wright III received the vaccination against COVID-19 on Monday in the Capitol Rotunda in Frankfort helping to ensure the continuity of state government and demonstrating bipartisan support for the safe, effective vaccine that is crucial to ending the pandemic and saving lives.

COVID-19 cases have surged by 115 and at least six new deaths since last week in Letcher County.

The epidemiologist for the Kentucky River District Health Department has resigned, and the district is now using state figures. A spokeswoman for Gov. Andy Beshear said she was attempting to reconcile the difference in numbers, but she had not provided an explanation for the differences at press time.

According to the latest figures, there have been a total of 1,017 cases of COVID-19 in the county, up 115 from last Tuesday. The incidence rate here is 76.2, the eighth highest in the state.

New federal statistics show there were 92 active cases of COVID-19 at the nursing home with two recovered and six dead for a total of 100 positive tests there among patients. There were 49 active cases among the staff with seven recovered.

In the District 8 Emergency Management District, which includes 12 counties from Letcher to Martin, 152 patients were hospitalized with COVID-19, with 48 in intensive care units (ICU) because of the virus, 30 on ventilators. District-wide, ICU capacity is at 84.56 percent, the second highest in the state.

The vaccine is coming into the area, though slowly. Some medical personnel in Letcher County received the first injections on Monday, including some at Mountain Comprehensive Health Corporation. MCHC Chief Executive Officer Mike Caudill said the clinics received 300 doses of the Moderna vaccine, which had to go to first tier providers, followed by high-risk patients. The clinics began administering just after noon on Monday. Caudill said by Tuesday evening, MCHC had given 176 vaccine injections. He received one of the doses to show that he has confidence that it is safe to take.

Walgreens and CVS pharmacy are immunizing nursing home staff and patients under a contract with the state. Health departments in Perry and Lee counties were giving shots to police and emergency medical personnel this week.

“It seems to be going great so far. We’re doing first responders there, and then we will start on nonhospital based nurses,” Kentucky River District Health Department Director Scott Lockard said Tuesday.

First responders are scheduled to receive the vaccine around the middle of next week here.

Medical experts say it could be next summer or fall before everyone who is going to take the vaccine gets it, however President-elect Joe Biden is expected to invoke the Defense Production Act to speed up production of personal protective equipment, test materials and the raw materials for the vaccines when he takes office January 20.