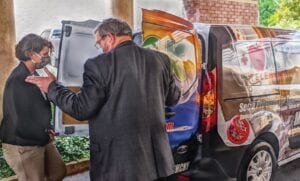 CANDIDATE VISITS — Democratic Senatorial Candidate Amy McGrath visited Whitesburg Tuesday. In the photo above, Mountain Comprehensive Health Corporation CEO Mike Caudill talks to McGrath about the vans the clinics use to test for COVID-19 at sites around the region. (Photos by Sam Adams)

Letcher County has seen 12 new COVID-19 cases in the past week, the highest weekly increase since the pandemic began, and state numbers are rising also.

Kentucky Gov. Andy Beshear has again closed bars and restricted crowd sizes at restaurants to 25 percent of capacity. Private parties are to have no more than 10 people, and Beshear has mandated masks in public establishments and issued a travel advisory for many Southern states. New York is now requiring travelers from Kentucky to spend 14 days in quarantine after arrival.

The number of cases in Letcher County has grown to 40, double the number from two weeks ago, but is still behind the numbers posted in neighboring counties.

Beshear said Tuesday that the rate of positive cases is now 5.08 percent of tests given.

“That’s the first time it’s gone down in four days,” he said at his daily press briefing. 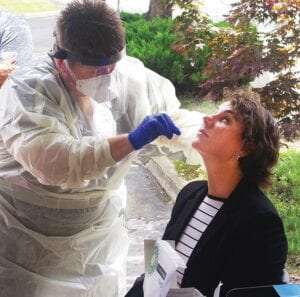 TESTED — During her visit to Whitesburg Tuesday, Democratic Senatorial Candidate Amy McGrath was tested for COVID-19 at Mountain Comprehensive Health Corporation’s Whitesburg Clinic. McGrath said she normally is tested about once a week, but she was on the road and had not had a chance to go to her normal testing site. When MCHC Chief Executive Officer Mike Caudill offered the test as she was touring the clinic and learning about its mobile testing vans, she sat down for the test administered by Tammy Collins, Regional Director for MCHC’s Cumberland River region clinics.

There were 532 new cases and 10 deaths in the state on Tuesday, up slightly from a day earlier, but down from the record 979 reported July 19.

Beshear noted that both deaths and the results of new restrictions take time to effect after new cases are reported. He said he hopes, but can’t prove, that the mask mandate put into effect earlier this month is having an effect.

He said Florida now has more cases than any other state, and will inevitably see a surge in deaths in the coming weeks. Texas, he said, is reporting one COVID-19 death every 6 minutes and 16 seconds.

“We are at a point in time where we can stop this before it gets where it is in other states,” the governor said.

He noted that even family members of his own friends are ignoring warnings and traveling to the beach, knowing that the numbers in Florida are exploding. While not officially restricting travel, Beshear has issued a travel advisory and begged Kentuckians on Tuesday to cancel their vacations.

“We cannot travel in these area. All out there want to get our kids back in school, but if we do that safely, what happens if one person does that?” he asked.

Traveling around Letcher County in the past week shows people are mostly taking the mask requirement seriously in large stores, but half or less are following the requirements in many smaller establishments, and many county residents are posting vacation pictures from beaches online.

In Pike County, state figures show 196 cases, up from 167 last Tuesday, however the Pike County Health Department did not post its own figures as it has been doing. In Harlan County, with less than half the population of Pike County, 190 cases are now reported by its health department, up from 147 last Tuesday, and more than double the 86 cases two weeks ago. In Perry County, the number of cases now stands at 166, up from 144 last Tuesday.

The Kentucky River District Health Department reported one death Tuesday in Knott County. According to the department, a 57-year-old woman died from the disease. That is the third death reported in the seven-county district.