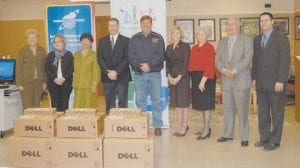 Through a grant from the Appalachian Regional Commission, ConnectKentucky gave the Letcher County Public Library District 14 computers on Feb. 26 for Letcher County residents to surf the Internet. Six of the computers at Harry M. Caudill Library in Whitesburg will be used in a computer lab to teach people how to use a computer and the Internet. Pictured from left are Margaret Lewis and Mahala Frazier, both members of the library board, Lena Tidal, director of the Letcher County Public Library District, Randy Bailey, director of technology for the Letcher County School System, Letcher County Judge/Executive Jim Ward, Regina Crawford, field representative for U.S. Senator Jim Bunning, Jeanette Ladd, president of the library board, Whitesburg Mayor James Wiley Craft and Mark Messer, project manager of ConnectKentucky.

Letcher County’s public libraries will soon be able to offer more computer access to the public, thanks to the donation of 14 brand new computers from ConnectKentucky.

“These computers are very much needed and will be used extensively,” said Lena Tidal, director of the Letcher County Public Library District. “Our objectives have always been to provide adequate computers to increase usage of free access to the Internet and to offer computer literacy to our citizens and to assist and instruct our patrons on the use of this equipment.”

The library system was given 14 Dell computers at a presentation held February 26 at the Harry M. Caudill Memorial Library in Whitesburg.

Tidal said six of the computers given through ConnectKentucky’s Computers 4 Kids Program will mainly be used in computer literacy classes in the basement of the Caudill library, where classes are being offered to both adults and children.

“With the additional computers from ConnectKentucky we can offer computer classes to families, senior citizens and anyone who does not have the opportunity because of economic reasons,” said Tidal. “We will offer these services to enhance and improve the quality of lives of our citizens and help them participate and compete in all areas of the global economic environment.”

The other computers will be placed at the Jenkins Public Library, Lillian Webb Memorial Library in Neon, and the Blackey Public Library to provide Internet access to the public. Jenkins and Blackey each received three of the computers and the Neon library received two computers.

“Today we will cut the waiting lines of students wishing to use computers and give them longer hours to surf the Internet,” said Tidal.

Tidal said that at least five to 10 students visit the Neon library every day in the summer for one reason — to access the Internet.

Tidal said it has been a goal of the library board to provide more electronic resources to assist the public in both their personal growth and employment opportunities.

“The second goal is to select, organize and maintain a quality collection of electronic materials which will provide a basis for community information, education, recreation and historical preservation,” said Tidal.

Financing for the new computers was included in a $300,000 grant from the federal Appalachian Regional Commission (ARC) that will result in 1,500 computers being distributed in the ARC region. Lee, Floyd, Harlan, Bell and Martin counties have also received computers paid for with money from the grant.

Randy Bailey, director of technology for the Letcher County School System, said computers give students the opportunity to build on what they have learned during school.

“It’s our mission to educate these kids so they can do whatever it is they want to do in the future,” said Bailey. “When these kids go home, a lot of them are at a disadvantage because they don’t have a computer at home.”

Mark Messer, project manager for ConnectKentucky, said one of the best and most important places to put technology in a community is a library.

Call the Harry M. Caudill Library at 633-7547 for dates and times of upcoming computer classes.