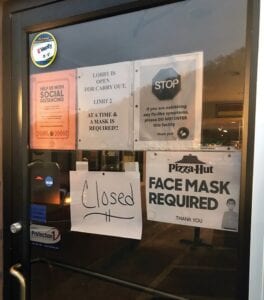 Customers — along with a number of employees — had no idea the Whitesburg Pizza Hut would be closing permanently on Tuesday until they showed up at the door of the Pine Mountain Junction location.

The restaurant, located at Pine Mountain Junction, opened about 30 years ago. Although it has always been profitable, the Whitesburg restaurant was operated by a Kansasbased chain, NPC International, that filed for bankruptcy protection last August and announced that some 300 of its 1,225 Pizza Huts were subject to closure.

At the time, NPC, which operates Pizza Huts in 27 states, said that closing stores not designed for pickup or delivery would allow it to invest in smaller stores that can better handle online orders.

It was not known at press time whether the company intends to reinvest in the Whitesburg area. The property on which the restaurant building is located is not owned by NPC.