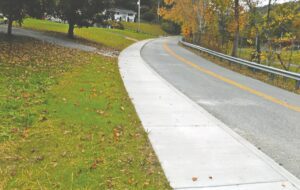 Money for this sidewalk project on Lakeside Drive in Jenkins was appropriated in 2007, but the work wasn’t finished until 2021.

In 2007 money was appropriated to extend the sidewalk up Lakeside Drive. This took place the first year of D. Charles Dixon’s term as Mayor of Jenkins. The sidewalk was badly needed for pedestrians and schoolchildren.

One reason for the lengthy delay was the specifications for the project kept changing. The delay in the construction is an example of how slow government works, especially in eastern Kentucky.

The bottom line is the sidewalk project is completed and the public can safely walk along beautiful Lakeside Drive in the City of Jenkins.