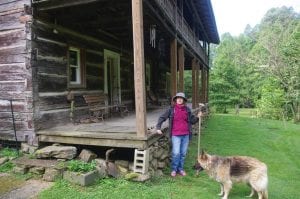 HISTORIC HOUSE – Artie Ann Bates stands by the front porch of her 144-year-old family house at Elk Creek. The house was just placed on the National Register of Historic Places. (Photo by Sam Adams)

When William Dixon built his house at the head of Elk Creek, he built it to last.

And last it has. For 144 years, four generations of his family have lived in the four-room, log house, and the more modern addition added to the rear.

This year, it was listed on the National Register of Historic Places, named the David Back Farm for husband of William’s sister Nancy, who bought the house from him in 1907.

Dr. Artie Ann Bates, great-granddaughter of David and Nancy, has lived in the house since the 1980s. She said she decided to have a smaller house built and to move out of the old family homeplace last year, a few years after her husband, John Cleveland, was killed while felling a tree. She now lives in a modern home just behind the old house.

“John and I lived here, and I guess it got too big and too empty,” Bates said.

The house is still used for family gatherings.

The house is a typical “doublepen” log home. Built in 1875, the first pen is 16 by 17 feet and two stories with a large, stone fireplace in one end. There is one room on each level. Anyone planning to sleep in the loft had to go outside and climb a ladder affixed to the wall behind the chimney. About 1895, William’s son Stephen built the second pen as a house of his own and attached it to the chimney, which was modified to have a fireplace on each side. A stairway led to the second floor of “the new house.” The two houses were covered with a single roof, but residents of one side couldn’t get in the other side without going outside until the 1940s when doorways were cut in each cabin, just in front of the chimney. 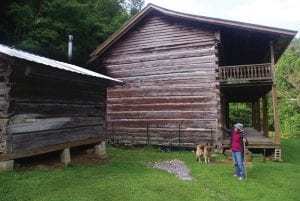 HISTORIC FARM – Artie Ann Bates points out the original smokehouse built about 1875 on her farm at Elk Creek. The log house has been in continuous use for 144 years. (Photo by Sam Adams)

The farm is a good example of pioneer living in part because it includes the original log barn, the smokehouse, and corncrib, as well as the house.

“When you see where everything is, you can actually mentally recreate their lifestyle,” Bates said.

The smokehouse is just steps from the house, the front door turned toward a wall to keep out the hot sun. The bottom logs are covered in the residue from salt used to preserve foods before refrigeration, and the second floor logs are smoked black from years of curing meat.

A little farther from the house is the corncrib, and a little farther still is the barn, squatted down near the creek bank, where the smell would not be overwhelming.

A few weeks ago, someone was mowing the front yard when he saw a sinkhole beginning just a few feet from the porch. It continued to get worse so Bates had the worker dig into it. He finally uncovered the square, stone-lined hole a few feet from the front porch, where the hand-dug well for the home had been. Bates said she knew there had been a well somewhere when her family lived there in the 1950s, but didn’t know about the location.

She credits the preservation of the house and outbuildings to the fact that someone in the family has always lived in it and kept it up.

‘It’s in good condition,” said Bates. “It has some wear and tear, some bottom logs had to be replaced, and John and I did some work to it.”

Part of the home has carpet, and drywall covers the upstairs walls, but it is otherwise similar to how it would have looked more than 100 years ago when it served as a post office for Grouse, Ky.

The farm was added to the National Register on April 4 with the address restricted because of its remote location. Bates is having work done around it now, putting the driveway back closer to the original location, and trying to make it safer for handicapped visitors to get around. She hasn’t decided what she wants to do with it yet, but she said she wants the public to see it.

The house is one of only three individual properties in Letcher County on the National Register of Historic Places. The other two are the old Jenkins High School and the C.B. Caudill Store at Blackey. The Kingdom Come Settlement School was on the Register, but was torn down.

There is one historic district in the county. The Downtown Whitesburg National Register Historic District, with buildings from 1896 to the 1950s, was added to the Register in 2006.