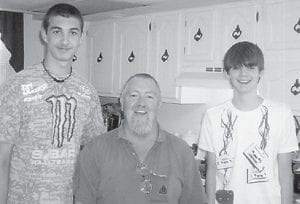 14TH BIRTHDAY — McQuade Walters celebrated his 14th birthday on August 18. He is the son of Paulla and Eddie Adams of Ermine, and Mark Walkers of Prestonsburg. His grandparents are Sheila Walters of Hazard, Dorse ‘Frog’ Walters of Blackey, and Ricky and Sharon Brown of Somerset. He is the great-grandson of Kathleen Brown, also of Somerset. He is pictured with his older brother Tanner Walters, 16, and his grandfather, Ricky Brown, on a recent trip to visit his grandparents in Somerset. He also has a younger sister, Maysa Adams, 4. He is a freshman at Letcher County Central High School.