150 years of dieting fads and still no quick fix exists 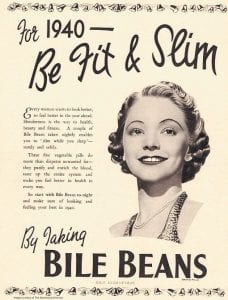 A 1940s advertisement for Bile Beans, which offered the World War II generation an unsafe laxative approach to slim down — even as the first ideal height-and-weight charts arrived. A look back at diet history shows what hasn’t changed is the quest for an easy fix. (AP Photos/The Advertising Archives via Library of Congress)

Before there was Dr. Atkins, there was William Banting. He invented the low-carb diet of 1863. Even then Americans were trying out advice that urged fish, mutton or “any meat except pork” for breakfast, lunch and dinner — hold the potatoes, please.

It turns out our obsession with weight and how to lose it dates back at least 150 years. And while now we say “overweight” instead of “corpulent” — and obesity has become epidemic — a look back at dieting history shows what hasn’t changed is the quest for an easy fix.

“We grossly, grossly underestimate” the difficulty of changing behaviors that fuel obesity, says Clemson University sociologist Ellen Granberg, after examining archives at the Library of Congress. She believes it’s important to show “we’re not dealing with some brand new, scary phenomenon we’ve never dealt with before.” 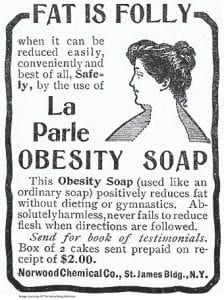 Consider Englishman William Banting’s account of losing almost 50 pounds in a year. He did it by shunning “bread, butter, milk, sugar, beer and potatoes, which had been the main (and I thought innocent) elements of my existence” in favor of loads of meat.

His pamphlet, “Letter on Corpulence, Addressed to the Public,” quickly crossed the Atlantic and become so popular here that “banting” became slang for dieting, Granberg says.

While obesity has rapidly surged in the last few decades, we first changed from a nation where being plump was desirable into a nation of on-again, offagain dieters around the end of the 19th century, Granberg says.

Before then, people figured a little extra weight might help withstand infectious diseases that vaccines and antibiotics later would tame. It also was a sign of prosperity. But just as doc- Above, 1903 advertisement for La Parle Obesity Soap proclaimed the product “never fails to reduce flesh.” It was selling at a pricey-forthen $1 a bar. tors today bemoan a hightech, immobile society, the emergence of trolleys, cars and other machinery in the late 19th century scaled back the sheer number of calories people once burned, Granberg explains. Increasing prosperity meant easier access to food.

“An excess of flesh is to be looked upon as one of the most objectionable forms of disease,” the Philadelphia Cookbook declared in 1900. Low-cal cookbooks hadn’t arrived yet; the calorie wasn’t quite in vogue.

By 1903, La Parle obesity soap that “never fails to reduce flesh” was selling at a pricey $1 a bar. The Louisenbad Reduction Salt pledged to “wash away your fat.” Soon came an exercise machine, the Graybar Stimulator to jiggle the pounds. Bile Beans promoted a laxative approach.

As the government prepared to update U.S. dietary guidelines this week, the Library of Congress culled its archives and, with Weight Watchers International, gathered experts recently to discuss this country’s history of weight loss.

The government’s first advice to balance proteins, carbohydrates and fat came in 1894. A few years later, life insurance companies reported that being overweight raised the risk of death. In 1916, the Department of Agriculture came up with the five food groups. Around World War II, charts showing ideal weight-forheight emerged, surprisingly close to what today is considered a healthy body mass index.

Yet fast- forward and two-thirds of Americans today are either overweight or obese, and childhood obesity has tripled in the past three decades. Weightloss surgery is skyrocketing. Diet pills have been pulled from the market for deadly side effects, with only a few possible new ones in the pipeline.

More and more, specialists question how our society and culture fuel overeating.

“Should it be socially desirable to walk down the street with a 30-ounce Big Gulp?” asks Patrick O’Neill, president-elect of The Obesity Society and weightmanagement director at the Medical University of South Carolina.

Negotiating a weight-loss menu for a family with different food preferences is a minefield that affects how people feel about themselves and their relationships with loved ones, adds Clemson’s Granberg, who began studying the sociology of obesity after losing 120 pounds herself.

“If what you need is a nutritionally sound, healthful weight-loss plan, you can get 100 of them,” she says. “That, we have figured out in the last 100 years. It’s how to do all this other stuff that I think is the real challenge.”