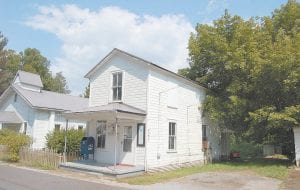 This post office located in a former South East Coal Company house at Seco is among 16 Letcher County post offices facing shorter operating hours under a plan being considered by the U.S. Postal Service. (Photo by Sally Barto)

Nine small post offices in Letcher County that had been scheduled to close will remain open, but operating hours at those and seven other offices here may be reduced, according to a spokesperson with the U.S. Postal Service.

David Walton, spokesperson for the Kentuckiana district of the U.S. Postal Service, said the majority of postal customers were against a proposal announced in July 2011 to close about 3,700 post offices nationwide.

“We heard them loud and clear,” said Walton.

The postal system recently announced a new strategy to keep smaller post offices open and potentially save an estimated half billion dollars annually.

Retail window hours could be reduced at 13,000 post offices nationwide including 16 in Letcher County.

Access to retail lobbies and post office boxes would remain the same and town ZIP Codes and community identity would be retained, according to a recent press release issued by the postal service.

“This is the next best thing,” said Walton.

The new plan, which will not be completed until September 2014, will be implemented in multiple phases over a two-year period.

The hours of reduction will depend on customer use and Walton said the postal system is in the process of scheduling community meetings for all 13,000 locations. He said meetings would not take place before Labor Day, which is Sept. 3.

Postal customers will receive a survey asking for preferred times of operation. The results of the survey will be presented at the community meetings.

Walton said 26,000 of 32,000 post offices nationwide don’t bring in enough revenue to cover expenses. He attributed people paying bills online and people communicating through email as reasons why people aren’t using the postal system as much as in previous years.

“Letters are kind of a thing of the past,” said Walton.

The nearly-bankrupt Postal Service reported losses last week of $57 million per day in the last quarter and warned it will miss another payment due to the U.S. Treasury, just after its first-ever default on a payment for future retiree health benefits.

From April to June, losses totaled $5.2 billion, up $2.1 billion from the same period last year.

The agency said it is being hurt significantly by mounting expenses for future retiree health benefits. Those expenses, mandated by Congress in 2006, made up $3.1 billion of the post office’s quarterly loss, while workers compensation tacked on another $1.1 billion in expenses. The agency’s operating loss was $1 billion, mostly due to declines in first-class mail.

The Postal Service for months has been urging Congress to pass legislation that would allow it to eliminate Saturday mail delivery and reduce the annual health payment of more than $5 billion. The post office defaulted on that payment earlier this month when the House failed to take action before heading home for a fiveweek break.

The mail agency says it will miss the second $5.6 billion payment due on Sept. 30, also for future retiree benefits, as cash runs close to zero.

At a news briefing, Postmaster General Patrick Donahoe made clear that dayto day mail delivery will not be disrupted in any way despite the cash crunch. But Donahoe expressed frustration with the repeated delays by Congress, which he said is contributing to a lot of “negative talk on finances” that could undermine confidence in the mail agency and its long-term growth.

“Congress needs to act responsibly and move on this legislation,” he said. “This is no way to run any kind of business.”

The Senate passed a postal bill in April that would have provided financial relief in part by reducing the annual health payments and providing an $11 billion cash infusion, basically a refund of overpayments the Postal Service made to a federal pension fund. The House, however, remains stalled over a separate bill that would allow for aggressive cuts, including an immediate end to Saturday delivery. Rural lawmakers in particular worry about the impact of closures in their communities.

The Postal Service originally sought to close lowrevenue post offices in rural areas to save money, but after public opposition, it is now moving forward with a new plan to keep the 13,000 open with shorter operating hours.

The Postal Service, an independent agency of government, does not receive tax dollars for its day-to-day operations but is subject to congressional control.