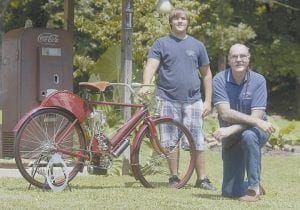 “I didn’t have a plan for all this,” Embry said standing between two rows of vintage motorcycles.

Embry’s latest addition is a 1906 Indian Camel Back, so named because of the curved gas tank that sits on top of the rear fender. He said as far as he knows, this is the oldest motorcycle in Kentucky. It took three years and about $6,000 to restore it, he said. The motorcycle looks like a bicycle with a motor. There is no clutch and it goes about 30 mph. It doesn’t have brakes either. The rider stops the motor by pedaling backward.

The bike has not been ridden since its restoration and probably won’t be, said Embry, who is more than 6 feet tall. “It’s too fragile.”

The old bikes have interesting characteristics. A 1923 Harley has a fuel-fed headlamp. Embry said old-timers tell stories about the headlamp keeping them warm and of tying a can of pork and beans to the light. “When they got where they were going, they’d already have cooked their supper.”

Embry has more than 30 motorcycles ranging from 1906 to 1971. All the bikes are road ready. Embry’s grandson often hangs out with his granddad. Justin Embry, 14, isn’t old enough to ride on the street but when he is, he has his eye on the 1971 blue and white Sparkle American Night Train. Harley-Davidson quit making them that year. “They didn’t go over well because they sit too high in the saddle and have European fenders.”

One doesn’t have to have an interest in motorcycles to appreciate Embry’s collection. A 1911 Yale has a tandem seat. And a 1915 Shaw with wooden wheels and carbide lamp is a standout in its original red and cream paint. The bikes are worthy of being exhibited in an art museum.

Embry and his wife, Nancy, who is co-proprietor of the museum, go to swap meets. The best part of those trips is sitting around with older bikers and hearing their stories, Hombre Embry said. And at age 54, he too has a lot to tell younger bikers – including how he got his moniker in 1969.

“Guys I ran with, there were four Jacks. Embry sounded like hombre, so that’s what they started calling me,” he said.