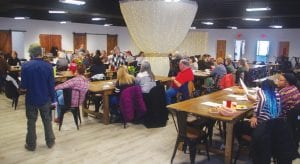 Letcher County residents, black and white, gathered at the CANE Kitchen in Whitesburg on Monday for the annual Martin Luther King Day Brunch. About 85 people attended the program, which included speeches by Pastor Steve Peake (left) of the Corinth Missionary Baptist Church in Fleming, Bishop Willie Lamb of McRoberts, the Rev. Preston Mitchell, an Episcopal priest from Wise County, Va., and brief comments by Kentucky Supreme Court Justice Sam Wright and State Rep. Angie Hatton, both of Whitesburg. The program also included traditional African American songs such as “Wade in the Water” and “We Shall Overcome”, sung by a group of shape note singers from the county. (Photos by Sam Adams)

People gathered in Whitesburg this week to honor Martin Luther King Jr. might have come to the annual MLK Day brunch expecting usual unitary themes about the way families took care of each other without regard to race and how friendships here last a lifetime.

And while they heard those, too, they also heard the uncomfortable truth of Letcher County’s history of racial violence from an Episcopal priest working on a racial healing project in Wise County, Va.

The Rev. Preston Mitchell told of the 1927 lynching of a black man scant feet across the state line, after he was forcibly removed from the Letcher County Jail, and the flogging of the two women who had been arrested with him.

Mitchell, wearing the black collarino and white clerical collar of his office, said the project is intended to inform people of the past and help them move ahead. Three lynchings have been identified in Wise County, but so far he has found none in Letcher.

(Newspaper accounts show a man named Sid Combs was lynched in Whitesburg in May of 1883. Since his race is not mentioned in the news, it is assumed he was white, as most newspapers of the time only identified the race of people who were other than white.) 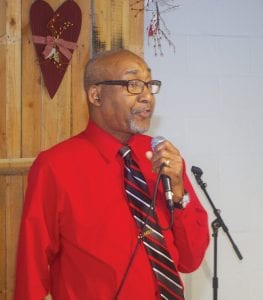 Mitchell’s focus is on Wise County, but the events leading to the lynching of Leonard Woods began in Letcher County, and the lynching very nearly occurred here. For that reason, he accepted an invitation from Pastor Steve Peake, a Baptist minister here, to speak at the MLK Day event.

“By facing the past and learning from it, you turn in a new direction,” Mitchell said.

Leonard Woods, 35, a miner who lived in Consolidation Coal’s No. 6 Camp, had been accused of killing Hershel Deaton of Coeburn, Va., a white mine foreman in Fleming. Two men with Deaton told an unlikely account of two black women, Susan Arminster and Anna Mae Emery, stopping Deaton’s car as he and two coworkers drove back to Fleming from Virginia about 11 p.m. on Sunday, November 27. The men with Deaton claimed the women tried to force the men to give them a ride to Fleming, and when they refused, the women became enraged, one took a gun from her purse and handed it to Woods, who then shot and killed Deaton.

Police in Jenkins arrested Woods that Monday morning and placed him in the Jenkins City Jail, however when word came the next day to Police Chief Sam Privett that a mob might try to break him out, he sent Woods to Whitesburg to be placed in the Letcher County Jail, an imposing stone dungeon surrounded by an iron fence.

That night, shortly after midnight, the deputy sheriff on duty at the courthouse received a phone call that more than 30 cars had passed through Pound Gap headed for Whitesburg. He called Sheriff Morgan Reynolds, who came to the courthouse and moved Jailer Manta Whitaker and her children to the courthouse, and said when he came out, a mob of more than 200 men had gathered in the street.

They broke Woods, Arminster and Emery out of jail, flogged the women with a whip, and dragged Woods around the courthouse. They loaded him up in a car, took him first to Slick Rock Hollow at Dunham, where the first killing took place, and then to the top of the mountain where days before the governor of Virginia and a Kentucky congressman had stood on a reviewing stand and gave speeches to open the new road at the state line.

“The red, white and blue bunting was still on it,” Mitchell said.

“Estimates are between 1,000 and 1,500 people at three in the morning strung him up,” Mitchell said, adding that they then fired volley after volley of gunfire into him, poured gasoline on the body and set him on fire. Gawkers came from miles away to see the body after word spread of the lynching. Woods was buried in a shallow grave by the roadside before members of the African American community dug him up and took his body away for a proper burial. Mitchell said so far, they have found no one who knows where that is.

Three weeks after the murder, Kentucky and Virginia were still arguing over who should investigate. It finally fell on Letcher County Attorney Harry Moore, who dropped the charges against the women, but apparently made only a cursory effort to find who killed Woods, or Deaton for that matter. No one was ever prosecuted.

But, Mitchell said, one good thing did happen as a result. The lynching and the lack of legal consequences gained nationwide attention, and the Virginia legislature passed the first anti-lynching law in the nation the following year.

The story of the Woods lynching has been largely forgotten by the white community of Letcher County. About 85 people attended the Martin Luther King Day Brunch this week, and fewer than 10 were African American.

The group honored Bishop Willie Lamb of McRoberts, a retired United Mine Workers coal miner, who at age 95 describes himself as “the oldest colored man in Letcher County,” and talks of the days of his childhood in Tom Biggs Hollow, when he and his 14 brothers and sisters sometimes depended on the kindness of neighbors, many of them white, to have enough food to eat and enough clothes to wear. Love people all over the world, Lamb said, without considering they are different from you.

“If you were hungry, somebody would bring you something to eat,” Lamb said of the coal camp where he grew up and still lives. “It wasn’t about race, it was about people.”

Peake , 67, lamented that the loss of the black community here.

“The black population is probably down to 1 percent,” Peake told the crowd at the CANE Kitchen event. “To get things done, we have to have, one, people who love the Lord, and, two, people who love what’s right.”

Peake said he has lived in other places, including cities, but he always came back to Letcher County, because people here “have learned to respect each other,” he said.

“That’s what I like about people in Letcher County,” he said. “You make a friend, and they’re your friend for life.”