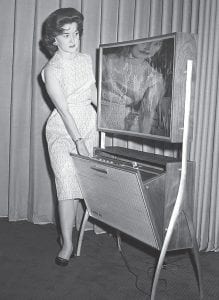 Those attending the Home Furnishings Market in Chicago in June 1961 were told that TV viewers of the 1970s would see their programs on sets quite different from then, if designs that were being worked out were developed. A thin TV screen like the one is this photo is a feature of this design model. Another feature predcicted in 1961 was an automatic timing device which would record TV programs during the viewers’ absence to be played back later. The 32×22-inch color screen shown in this photo was four inches thick. (AP Photo)