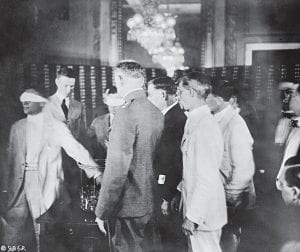 Sometime after the U.S. Congress passed the first Selective Service Act on May 19, 1917, Secretary of War Newton D. Baker, blindfolded, picked the first number of the military draft in Washington, D.C., in 1917. Exact date is unknown. (AP Photo)

World War I, also known as The Great War, started in Europe in 1914 when the Archduke of Austria-Hungary was assassinated. The United States initially opted not to get involved in the fighting of the war. However, Germany’s constant threat to sink American shipping to Europe, and pits their frequent sinking of our ships, eventually change the opinion of the American public. The United States declared war on Germany on April 6, 1917.

Because the political climate of the United States had for years been isolationism, America was ill prepared for war at the time Congress declared war on Germany. It took time to build the war machine needed to participate successfully in World War I. Soldiers needed to be drafted and trained. Weapons needed to be made. Ships, tanks, and airplanes needed to be built. And gas masks needed to be manufactured.

Following is the timeline of America’s involvement in World War I during the months of April and May, 1917.

April 7: First U.S. Shot of WWI. A Marine aboard the USS Supply fires from the Cormoran across the bow of a German motorboat in Apia Harbor, Guam.

April 28: First U.S. Navy KIAs (Killed In Action). Five sailors of the Armed Guard are KIA when the oil carrier Vacuum is sunk by a German submarine off the coast of Scotland.

May 4: First U.S. warships — the Destroyer Squadron 8 — reach Queenstown, Ireland, to aid in the blockade of Germany.

May 19: The Draft. Congress passes the Selective Service Act.

Compiled by Tony Blair of Jeremiah. Source: “World War I Combat Chronology 1917-18,” The VFW Magazine, April 2017 issue, page 16. A short summary of the First World War titled “U.S. enters World War I” was published in the April 5 edition of The Mountain Eagle.