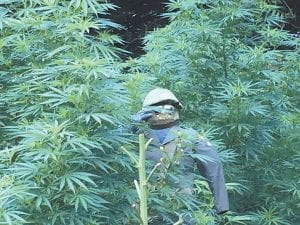 Police officers watching from above and on the ground have arrested two Letcher County men on charges of cultivating more than five plants of marijuana.

“I responded to a complaint of several dogs (that were) uncared for,” Dingus wrote in an arrest citation. “While there, I saw the tops of several marijuana plants over the back fence. Subject stated that it was medicinal and that he had approximately 15 plants. Ninety-one (91) plants were recovered from the property.” 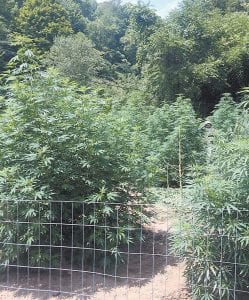 According to Dingus, some of the plants outside Wright’s home had reached heights of 14 to 15 feet. He said the plants were inside a fenced area and had been covered by a tarp, but had outgrown it.

Dingus said Wright is a “longtime grower” but hadn’t lived at the present location for very long.

Dingus said Wright told him he doesn’t sell the marijuana he grows, but gives away what he doesn’t use himself to medical patients.

Bates, of 7846 Highway 7 North, was arrested by state police July 16 after officers with the agency’s “Cannabis Suppression Branch” spotted nine plants growing around Bates’s home during a helicopter flyover.

“Subject had nine marijuana plants growing on his property that was spotted by KSP aircraft,” KSP Trooper J. Wireman wrote in an arrest citation. “All nine plants were found in buckets and planted in ground around house. Two plants were spotted by ground crew from driveway along side of the residence.”

Letcher County’s total number of pot plants found and destroyed is low when compared to other counties in southeastern Kentucky. While Letcher is not among the state’s 10 top marijuanaproducing counties between 1998 and 2013, the neighboring counties of Knott, Perry and Harlan were ranked eight, nine and 10. Leslie County was the state’s top pot producer during the 15-year period, with 1,101,920 plants found and destroyed. In Knott County, 452,202 plants were eliminated between the 1998 and 2013 growing seasons. Pot growers in Perry County lost 429,047 plants to police during the period, while Harlan growers lost 383,117 plants.