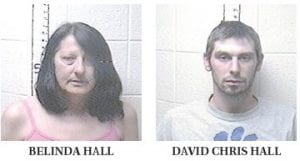 Authorities believe five persons arrested on Cumberland River Coal Company property early May 2 were returning to the scene of a crime they committed less than a week before.

The five — including a 49-year-old mother and her 31-year-old son and a 56-year-old man released from prison just recently — were caught at Cumberland River’s Trace Fork mine at Frank’s Creek near Eolia after a company dispatcher spotted the same vehicle that was seen on security camera footage at the mine early on April 27 when more than 500 feet of high-voltage copper power cable was stolen.

The April 27 theft, which occurred while the operation was idled for the weekend, resulted in portions of the mine being flooded after power was knocked out to pumps used to keep water from accumulating inside.

Kentucky State Police in Hazard say they received a call from Cumberland River Coal at 1:25 a.m. on May 2 informing them that the Ford Explorer seen April 27 with a trailer in tow, was back at the mine at Black Mountain and that a theft was in progress. Company security guards were also alerted and were able to lock the gate leading to the property before the alleged thieves could leave. 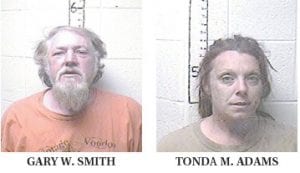 When troopers arrived at the scene they located the vehicle and three men and two women who in possession of property that belonged to the coal company. The property was taken from the suspects and returned to the company after the five were arrested.

The mother and son charged were Belinda Hall of 42 CSX Drive, Whitco, and David Chris Hall of 22 CSX Drive. While both face counts of theft of up to $500 and second-degree criminal trespass, the son faces an additional charge of possession of a controlled substance not in its original container.

Gary W. Smith, whose address is listed on the citation only as Whitesburg, is charged with theft, criminal trespass and being a persistent felony offender. Smith was released on supervised parole April 1 after serving 32 months of a 60-month state prison sentence imposed after he was caught making methamphetamine at his Isom home in early January 2010. 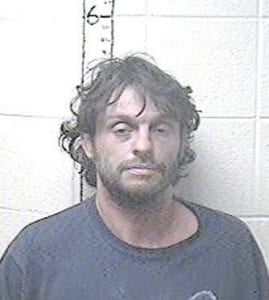 All five suspects pleaded not guilty during arraignments in Letcher District Court on Friday. Bond for James Fields, David Hall and Gary Smith was set at $20,000 cash each with home incarceration. Bond for Tonda Adams and Belinda Hall was set at $10,000 each with home incarceration. Both women have been released from jail, but the three men remain in custody.

The five are scheduled to return to district court for a preliminary hearing on May 9.