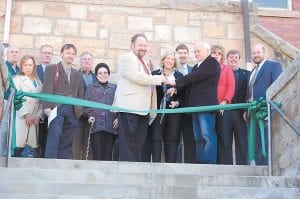 For more than 20 years a group of citizens in Jenkins has been trying to save the old school building located downtown.

“We sunk our teeth into it and we would not let go until something good happened,” said Jim Polly, chairman of the Old Jenkins School Committee.

In 1992, people began to notice the decline of state of the vacant building. The roof was leaking. Windows were out.

Rosemary Shook, a former educator, moved back to Jenkins from Florida around that time with her husband John Shook, a former Jenkins Independent Schools superintendent. Mrs. Shook cried when she saw the condition of the school.

“To see it deteriorate hurt her,” said Polly.

Holly B. Wiedemann, president of AU Associates, Inc., welcomed a large crowd Tuesday to a ribbon cutting and dedication ceremony for Jenkins School, which contains 26 one- and two-bedroom apartments for senior citizens who meet certain age and income guidelines. AU Associates preserved the 101-year-old Jenkins school building by transforming it into affordable housing. Located behind Wiedemann is the former school stage which is the new studio of the Letcher County government operated television channel.

After some major cleaning, Polly said thousands of people toured the building.

“That showed the love people had for this building,” said Polly.

Letcher County Judge/ Executive Jim Ward said he called Lexington-based AU Associates after learning the company had completed a similar preservation project in Jackson County. Ward wanted AU Associates to transform one of the old schools owned by the county into affordable housing. Jenkins, Kingdom Come and Campbell’s Branch schools were considered for renovations. AU Associates entered into a 50- year lease agreement in February 2013 with Letcher Fiscal Court to preserve and use the old Jenkins School, located on Pane Street.

“Look at how much they have preserved this building,” said Ward. “They have done an excellent job. We were able to take this building and make it a successful building for the City of Jenkins and the county. I’m just amazed at how well all of this has turned out.”

Costs associated with the renovation were projected to reach $3.1 million, according to Johan Graham, director of development for AU Associates.

“We’re very happy to allocate these resources to projects like this that will have a lasting impact to residents of a community,” said Hawes.

Historic tax credits were awarded through the Kentucky Heritage Council.

Instead of an empty lot and a landfill full of building materials, Potts said Jenkins has a high quality facility that enhances the community.

“After all, is Jenkins really the same without Jenkins School?” asked Potts.

Construction began in mid- March and the project, which is called “Jenkins School,” is completed. Renters have already begun moving into apartments.

The 40,639-square-foot building is made up of five levels. The senior citizens center and government operated television studio will take up 4,796 square feet. The apartment units occupy a total of 20,682 square feet. The remainder of the building is hallway and circulation space, Graham said.

Apartments, a mechanical room and a laundry room are located in the basement. The old gymnasium/auditorium area will house the senior citizens center, which will include a state-of-the art commercial kitchen installed by AU. The studio for channel 98 is located on the old stage. A large glass wall separates the TV studio from the senior citizens center. Apartments are also located on the third, fourth and fifth levels.

A new plumbing system and roof are a part of the renovation as well. The exterior of the building has been cleaned and a new entrance was added to the back of the building.

AU Associates maintained many of the features that have made it such a beloved structure to many. Original building materials that remained in good condition — including American chestnut wainscot and trimming — have been restored, Graham said, and are an integral part of the transformation. The old scoreboard in the gym has been left intact, as has the old archway in the basement.

“Somehow they seem to be able to keep the historic nature of the structure and still modernize it to provide the safe sanitary housing that each renter deserves and needs,” said Phillip Wilkie, senior acquisitions manager with Community Affordable Housing Equity Corporation.

The building’s new design was based on the existing layout of the old school, which resulted in eight different floor plans for the building’s 26 apartment units.

“It’s expertly crafted to bring out modern amenities but a true sense of the historic nature of this building,” said Graham.

The facility is decorated with school memorabilia including a majorette costume and the old school bell.

Historic photos found in yearbooks, archives and the Smithsonian Institution were transferred to canvases and placed in the Jenkins School.

“We’re here to welcome back into your midst your sparkling, renovated and re-imagined Jenkins School apartments, the senior center and this amazing television station,” said Holly B. Wiedemann, president of AU Associates, during the ribbon-cutting and dedication ceremony on Feb. 11. “This outstanding school building represented the quality of the town and because of the quality of the education here the school expanded in 1924 and then again in 1936. It became one of the largest schools in this region.”

Wiedemann said Jenkins residents have known and loved the school for many years and it’s a testament to the community that it still stands.

“ It’s generous classrooms, wonderful gym and stage were no doubt the site of many life-forming memories,” said Wiedemann. “What a rich history we have here. We were honored to help the dreams of the Old Jenkins School Committee under the leadership of Jim Polly become a reality.”

Polly thanked AU Associates for its willingness to include the Old Jenkins School Committee in the renovation process.

Polly said the end result is beyond anything that the old school committee dreamed it could be.

“ You may think that a building project such as this can’t happen,” said Polly. “For 20 years we were told that can’t happen. Nobody is going to come in and spend the time and money that it is going to take to renovate the old school. Well, somebody did. So don’t let anybody tell you that something can’t happen because with enough hard work, enough prayers and enough love anything can happen.”