2007 was a year of frustration 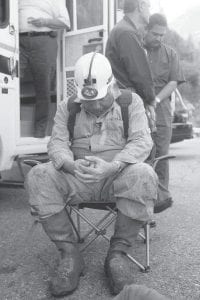 Robert Murray, founder and chairman of Cleveland-based Murray Energy Corp., lowered his head after giving an update on the rescue efforts for six trapped coal miners during a news conference at the entrance to the Crandall Canyon Mine in northwest of Huntington, Utah in this Aug. 8 file photo. (AP Photo)

A war winds on, but lawmakers are seemingly powerless to do anything about it.

The wrenching sorrow of tragedies on a Virginia campus, a Minnesota highway bridge and deep inside a Utah coal mine is compounded by a question that echoes: Could this have been prevented?

Thousands lose their homes in a mortgage and credit crisis that worsened – despite repeated assurances that the worst had passed.

Every year has grim headlines. But the story of 2007 was the frustration that wound through so much of the news. Americans repeatedly confronted the same images and the same misgivings in many of the year’s biggest stories.

The frustration factor was personified by former U.S. Attorney General Alberto Gonzales, at the vortex of criticism over the dismissal of eight federal prosecutors. When the story began around the New Year, most would have figured it as a mildly sensational, fairly routine political brouhaha.

Then it stretched into the spring and summer, with an endless loop of Gonzales’ vaguely apologetic denials. Called before Congress in April, he found more than 70 ways to say he could not remember what had happened. Any day now, pundits speculated, Gonzales could take the fall.

By the time Gonzales finally did resign effective in September, the focus on right or wrong had largely been replaced by a grinding frustration over why resolution – any resolution – had taken so long. Even when it ended, it did so without clarity.

That story was hardly unique. After a while it became difficult to separate the frustration built into many of the year’s biggest news stories from a public mood of resigned exasperation.

Were we frustrated by the events themselves, or was our frustration reflected in our reaction to them?

That frustration made it difficult to recall that 2007 had started with a mix of uncertainty and possibility.

Voters deeply dissatisfied with the Bush administration had signaled a strong desire for a new direction and invested those hopes in opposition Democrats.

“The election of 2006 was a call to change,” Rep. Nancy Pelosi proclaimed as she led her party into leadership of the House in January. “The American people rejected an openended obligation to a war without end.”

The war has stretched well into a fifth year, with troops no closer to an exit. And in early November, troop deaths made 2007 the deadliest year for American troops since the war began.

The number of attacks, deaths and injuries dropped off sharply in recent months, but the improvement did little to revise public perceptions.

Opinion polls reflected public frustration with the inability of lawmakers to bring the war any nearer to an end, a feeling acknowledged by Pelosi.

“If you asked me in a phone call, as ardent a Democrat as I am, I would disapprove of Congress as well,” she told reporters.

The year’s frustrations were hardly limited to politics.

In April, the deadliest shooting rampage in the nation’s history provoked a national outpouring of grief for the people of Virginia Tech. But the initial horror turned to grim consternation when it became clear that university officials and others knew gunman Seung-Hui Cho was deeply troubled, yet they had missed any opportunity to prevent the killings of his 32 victims.

That futility lasted long after the massacre, with investigators stymied in their search for a motive and with continued handwringing over where or whether to place blame.

As memories of Blacksburg receded, the nation suffered still other tragedies.

In August, doubts about missed opportunities returned when the I-35W bridge in Minneapolis collapsed into the Mississippi River during rush hour. Thirteen people died and more than 100 others were injured. The miracle was that it wasn’t worse.

The curse was the nagging doubts about whether the disaster might have been preventable. Minnesota officials were warned as early as 1990 that the bridge was “structurally deficient,” but had relied on small-scale repairs and inspections rather than reinforcement or replacement.

Soon, attention turned to a disaster in a place that seemed all too familiar. Fully a year and a half after West Virginia’s Sago Mine tragedy prompted widespread calls for tougher oversight of the mining industry, an indelible reminder of those dangers happened in Utah.

At first, efforts to rescue six workers trapped inside the Crandall Canyon Mine appeared to offer reason for hope. But the deaths of three would-be rescuers compounded sorrow with futility. In November, investigators reported that despite the public’s focus on mine safety, federal regulators had failed to inspect one of every seven underground coal mines in the year following Sago – and that their inspections of the Utah mine were seriously flawed.

The year also saw greatly increased attention to global warming. Acknowledging the issue was one thing, finding solutions was another.

Policymakers made little headway. By year’s end, a group of states and cities were locked in a showdown with the federal government, pushing for stiffer fuel efficiency requirements for new cars and tighter emissions controls. Across the South, dry weather extended a parching drought that some blamed partially on climate change.

As officials battled for precious water, and belatedly began focusing on conservation, the drought’s persistence convinced some to try more extraordinary measures.

“We come here very reverently and respectfully to pray up a storm,” Georgia Gov. Sonny Perdue told a crowd of people who gathered outside the Capitol to seek divine intervention.

Meanwhile, the headlines offered more than enough to confound any consumer.

First came the recall of cat and dog food linked to the death of more than 100 pets, blamed on ingredients provided by a Chinese manufacturer. That lead to broad concerns about the safety of food products made in Chinese factories, but tighter import restrictions seemed fruitless. The pet food scare was followed by the Chinese toothpaste scare, then worries about seafood and lipstick.

Nothing unsettled the public as much as a series of recalls of Chinese-made toys, starting with Thomas the Tank Engine wooden train sets found to contain lead paint. That was in June, but more recalls of toys tainted with lead or other hazards continued well into November.

At the same time, energy prices rattled the public. Oil began the year at near $60 a barrel, but began climbing in the spring and just kept on going. By year’s end, the price regularly flirted with $100 a barrel. The question was how much that would cut into consumers’ ability to keep up spending. The answer was complicated by the fact that buying power was simultaneously curbed by a drop in the value of the dollar.

The frustration of higher prices at the pump seemed minor compared to the fears and uncertainty that accompanied a crisis in the housing and mortgage lending sector.

It began as the story of what sounded like a marginal niche of the economy – subprime loans. But concerns rippled. Maybe it was about more than thousands of people losing their homes. Maybe it was a sign of deeper troubles with the credit markets that sustain businesses, and a premonition of more serious woes that would could cut into the consumer spending that has long been the economy’s mainstay.

Or maybe not. Month after month, federal economic officials offered calm reassurances that the problems were “contained,” and did not pose a danger to the rest of the economy.

By year’s end, even optimists were sounding doubtful, the stock market had fallen sharply from record highs, and the questions about subprime had morphed into a debate over whether a recession was in store in the new year.

No wonder, then, that polls showed the majority of Americans frustrated with the status quo and with deep misgivings about the nation’s direction. And little in the news seemed to reassure us.

“Do you understand our frustration?” Maryland Sen. Benjamin Cardin asked Gonzales, in a July hearing.

“I do understand your frustration,” Gonzales replied.

The answer sounded simultaneously empathetic and empty. And at the end of the exchange, anyone craving resolution or relief probably was more frustrated than ever.