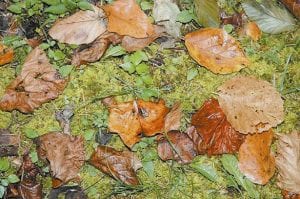 LEAVES DYING TOO SOON – Much of the ground throughout Letcher County is beginning to be covered by leaves that are dying too early. The leaves in this photo taken Monday afternoon were wet from a rain that did little to make up for the 11 inches of rainfall needed to end the current drought. (Eagle photo)

All that’s needed is a spark, set either deliberately or carelessly – and Kentucky’s forests could become infernos.

“Your fine fire sources – leaves, twigs – could immediately catch fire, and that’s going to go on up to the dead branches on the ground and then to trees,” said Doug McLaren, a forestry expert at the University of Kentucky.

It’s a situation McLaren and other forest-care specialists have observed in Kentucky all year, as below-normal rainfall has sent much of the state into an extreme drought.

And the situation probably will not improve this month or next.

“September and October are traditionally drier months in Other fires can result from Kentucky,” McLaren noted. Autumn historically presents a special danger of woodland fires as leaves fall from trees. This year’s drought adds to that situation by likely extending the danger period.

“We’re probably going to have an earlier leaf fall” because of the lack of rain, McLaren said.

That danger is double, because no rain means the new layer of dead leaves could be especially dry, offering a fuel that can catch fire quickly.

McLaren also noted that as the leaves change colors in advance of falling, more people may decide to take hikes in forests to enjoy the reds and yellows. These hikers can inadvertently cause conflagrations by starting cookout fires that are larger than necessary, or by neglecting to make sure their campfires are completely extinguished. homeowners or farmers trying to clear their yards or fields.

“Ninety-nine percent of the forest fires in Kentucky originate in someone setting fires, and they are not necessarily arsonists,” McLaren said.

Kentucky state law prohibits open burning within 150 feet of a wooded area, but in periods of extreme drought and dryness – like we face this fall – the distance between fires and woods should be much greater, McLaren said.

One reason is because the drought hasn’t just affected trees and woodland debris. People’s yards also have become drier, and while green grass tends to inhibit fires, drought-dried grass can fuel a fire’s spread.

“If you have grasses, you should extend the distance between open fires and woods to many, many hundreds of feet,” McLaren said.