2009 tree planting project is a success 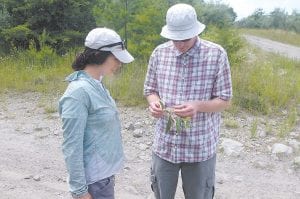 Ten years ago, the stripmined top of Jent Mountain near Carcassonne was a mostly barren plateau, covered in little more than lespedeza grasses.

The area had been mined years earlier, and except for a few stunted black locusts and autumn olives, no trees had grown on the site.

This summer, the same site is covered in native hardwoods, 10 feet tall or more, and many more than 20 feet.

“I think the trees are going to win,” Mike French said, examining the bloom of an Allegheny chinkapin recently. “This is going to be a forest.”

French is director of operations for Green Forests Work, a nonprofit formed as a result of the Office of Surface Mining’s Appalachian Regional Reforestation Initiative, a project intended to reforest strip mines that were not growing trees and not being used for agriculture. The trees at Jent Mountain were planted in March 2009 as part of that initiative. Green Forests Work officially had its first planting the following year. 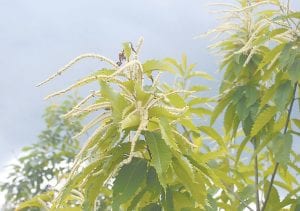 At right, the American chestnut has mostly been destroyed by a blight, however the American Chestnut Foundation has financed research into a cross pollinated tree that is 15/16 American Chestnut and 1/16 Chinese Chestnut to resist the blight. The bloom pictured is on one of several of the seedlings were planted on Jent Mountain in 2009.

In late June, French walked along the edge of the new forest naming off tree and plant species growing on the five-acre site. There’s black cherry, standing tall above the other young trees. There’s pin oak, and white oak peeking out around the birch, ash, slippery elm and box elder. Underneath is milkweed and blackberry from seeds carried in by birds, and Virginia pine has found its way there naturally, filling in the edges of the planting site. Here and there an American chestnut waves its long, fluffy bloom against the sky.

“I might think about coming in and getting rid of the autumn olives, but there’s really not much use,” French mused. “The forest is going to win.”

French pushed through high weeds along a road someone had cut through the site, and marveled at a redbud, then had reforestation coordinator Kylie Schmidt snap his picture next to an overachiever poplar so other foresters could see it. A tall, skinny autumn olive stumped him for a minute because it looked so different from the others, which were just shrubs. 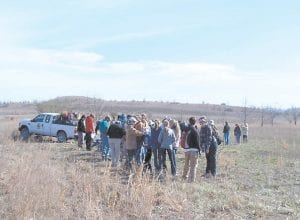 NINE YEARS AGO – Volunteers lined up to get tree seedlings and instructions during a planting on Jent Mountain at Carcassonne in 2009. The old strip mine was barren then, with only some lespedeza grasses and scrub brush. (All photos by Sam Adams)

“You look at the autumn olive, and it just doesn’t look happy. It’s taking a tree form and that’s just really weird,” he said.

Autumn olive grows to a maximum of 20 feet, and can’t grow in shade. The trees around it are already taller than it is.

“Once the trees get a little bigger, it’ll be done for,” French said.

The seeds of Green Forests Work were planted in 2009, so this is the tenth growing season for the earliest trees, including those at Jent Mountain. All of those trees were planted as oneyear old seedlings, mostly 18-inches to two feet high. There were nine projects that year totaling 36.6 acres. All were planted using partnerships between groups as diverse as James River Coal Company and the Sierra Club, and with all volunteer planters. The Jent Mountain site had 55 volunteers who worked a total of 440 hours, and planted 4,200 trees. Among the partners was the United Nations Reforestation Program.

The site on Jent Mountain is a success story for the Forestry Reclamation Approach, a method of reclaiming strip mines championed by ARRI and Green Forests Work. It was one of the first sites outside of test plots, and OSM soil scientist Dr. Patrick Angel said they were still getting a feel for what to do. Angel said there are huge amounts of acreage in Central Appalachia that need the same sort of plantings, and those plantings would create jobs for people in silviculture, forestry and, eventually, logging. When those jobs would start would depend on how long it takes to reforest the area.

“Nobody knows how many acres there are,” Angel said. “It can’t possibly be reforested in my lifetime. It will take many generations.”

Dr. Chris Barton, president of GFW, a forestry professor at the University of Kentucky College of Agriculture, and now former director of the Kentucky Appalachian Center, said the project started with nothing, but more partners are coming on board, including the Kentucky bourbon industry, which needs white oak for the barrels it uses to age whiskey. Bourbon companies are sponsoring tree plantings to make sure they have a source for that white oak decades from now. And while the project used to struggle to find landowners willing to let them plant, Green Forest Works now has an application on its web site that landowners have to fill out to have the work done.

“It’s come a long way,” Barton said. “We went from no funding and a few acres to 500 acres a year and putting about $1 million a year back into Appalachia.”

EDITOR’S NOTE: In the interest of full disclosure, reporter Sam Adams assisted in organizing the Jent Mountain tree planting as a Volunteer In Service To America in 2009. This story came about after he saw the site for the first time in more than two years, and was shocked at the growth of the trees.