2020 was one great year … … for local holiday decorations 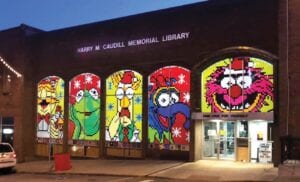 While 2020 was one of the more challenging years most of us have experienced, the year at least ended on a more colorful note than it began, thanks to a larger-than-usual number of home and business owners, city government officials, and local artists who worked to light Letcher County up for the holidays in a manner seldom seen before.

According to reports we received, homeowners in nearly every community in the county — be it Burdine, Thornton Creek, or Isom — put up more Christmas lights and decorations this season than ever before, helping to bring a brighter and more joyful ending to the tough year.

The photograph you see above shows a Christmas decoration that takes up all five of the large windows on the front of the Harry M. Caudill Memorial Library in downtown Whitesburg. Put together by schoolteacher Tyler Watts, also known as Letcher County’s “Post-it Picasso,” the decoration features characters from the 1992 film, “The Muppet Christmas Carol.” At Mountain Eagle press time on Tuesday, it remained as one of two larger-than-life decorations still up in downtown Whitesburg. The other is a two-story tall angel attached to Dr. David Narramore’s dental office. 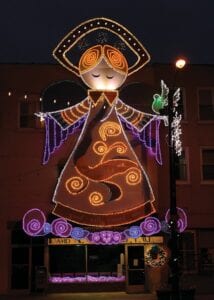 The angel in front of Dr. Narramore’s office.

L.M. “Mike” Caudill, the chief executive officer at Whitesburg-based Mountain Comprehensive Health Corporation, spoke for many when he observed that Dr. Narramore, who goes “all out” every Christmas season, “really outdid himself this year.”

Watts, who teaches math at Letcher Elementary School, donated nearly two weeks of his time and talent creating the library’s “The Muppet Christmas Carol” display, which is comprised of more than 10,000 Post-it Notes that were furnished to him by officials with the 3M Company plant located in Cynthiana, Kentucky.

“I love to inspire my fourth grade math students with my artwork,” Watts said. “It is my drive behind all of the projects. Having the opportunity to show them the math behind such a large scale project is a great opportunity to bring the curriculum to life.”

Watts said he hoped the Post-it Note mural brought “a smile and maybe a little laughter to our community during the pandemic,” adding that he chose the Muppets for this year’s display because they “made us laugh so much when we were growing up, and still do. ‘The Muppet Christmas Carol’ is one of our all time favorite Christmas movies. My daughter, Lilah, loves Chef and Beaker so I had to be sure to throw them in there for her.”

Watts said his annual display “has turned into a Christmas tradition here in our community that I am so happy to be a part of.”

Speaking of tradition, the City of Whitesburg and Mayor James W. Craft are to be commended for bringing new life this year to a 55-year-old “Santa Claus and Reindeer” decoration that many Letcher County residents remember fondly from all the years it was displayed at the former Royal Crown Cola bottling plant at Ermine. Mayor Craft and the Whitesburg City Council also deserve praise for continuing to purchase additional Christmas decorations each year for citizens to enjoy.

While noting that he knows of people who drove long distances to come to Whitesburg just to see the lighted angel attached to Dr. Narramore’s building, Caudill, the MCHC CEO, said he would like to see the city create some type of fund that could be used to buy enough lights and decorations to help turn the town into a holiday tourist attraction. Caudill suggests the city work toward purchasing special lighting that could be placed on each of its bridges that cross the North Fork of the Kentucky River.

“What would it look like if we took the city bridges — the one on Bentley Avenue, the one on Main Street, the one in front of Appalshop, and the two at the Upper Bottom — and did each one like that? What kind of a tourist attraction would that be to bring people in during Christmas?”

Caudill’s questions are ones we would love to see answered soon.