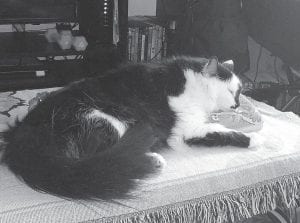 This photo provided by Lee Palmer shows Lux, a 22-pound Himalayan cat that attacked a seven-month old baby. Portland police had to be called in to subdue the 22-pound house cat that trapped its owners inside their bedroom after attacking their baby. The baby was not injured in the March 9 incident. (AP)

The Oregon owners of a 22-pound housecat that trapped them in their bedroom after attacking their baby say they’re not giving up on their pet and are getting it medical attention and therapy.

Two days after police arrived to subdue the 4-year-old part-Himalayan cat, owner Lee Palmer of Portland said he’s taking the feline to a veterinarian. A pet psychologist also is due at the house to see the cat, named Lux.

“We’re not getting rid of him right now,” Palmer said. “He’s been part of our family for a long time.”

Palmer says the animal attacked his 7-month-old child after the baby pulled its tail. The child suffered a few scratches on the forehead.

On the 911 call, Palmer tells the dispatcher he kicked the cat “in the rear” to protect his child. Palmer says the animal then “just went off over the edge” — leading Palmer and his girlfriend to barricade themselves, their baby and the family dog in the bedroom for safety.

The cat can be heard screeching in the background of the call as Palmer says in a panicked voice: “He’s charging us. He’s at our bedroom door.” Palmer also tells the dispatcher the cat has been violent in the past.

Officers used a dog snare to capture the animal, and placed it in a crate.

The cat attack story gained national attention after police put out a news release about it earlier this week. Palmer says the family has had proposals from people wanting to adopt Lux, but the family is not taking them up on it.