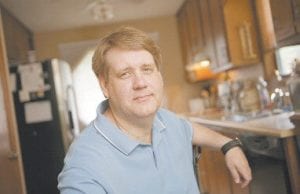 Mark Milota is dealing with unemployment at his Marietta, Ga., home and is no longer eligible for food stamps because of the $25 stimulus increase in unemployment benefits which began in March. (AP Photo)

When President Barack Obama increased unemployment benefits as part of his economic stimulus, he also made some Americans ineligible for hundreds of dollars a month in food stamps.

Under the economic recovery plan, laid-off workers have seen a $25 weekly bump in their unemployment checks as part of a broad expansion of benefits for the poor. But the law did not raise the income cap for food stamp eligibility, so the extra money has pushed some people over the limit.

Laid-off workers and state officials are only now realizing the quirk, a consequence of pushing a $787 billion, 400-page bill through Congress and into law in three weeks.

And for people hurt by the change, there’s no way around it.

“Everybody tells you, ‘Yeah, I can understand why you’re frustrated. It doesn’t sound right.’ But nobody knows where to go,” said Mark Milota, 47, of Marietta, Ga., who was laid off in November from his job at a medical billing company.

The Georgia Department of Human Resources explained in a letter to him last month that, because of the stimulus, he was ineligible for food stamps. He now makes $1,538 a month — $21 too much for a family of two to qualify.

“We have to pay him that $25 a week,” said Brenda Brown, assistant commissioner at the Georgia Department of Labor. “And he doesn’t have the option not to accept it.”

Milota said he was told that, without the stimulus money, he would have received about $300 a month in food stamps.

“I’m doing things I’ve never done before: I’m going to food pantries. I’ve gone to places for assistance on bills,” Milota said. “Some bills are just not being paid. I’m three months behind on my mortgage.”

Unemployment benefits vary by state and the income cap for food stamps also varies based on family size, so it’s impossible to say for certain how many people are hurt by the change. Government officials believe it is only a small fraction of the record 6.8 million people on unemployment. Many more people will benefit from a stimulus law that expanded unemployment and food stamp benefits.

“We’ve gotten some questions about this. Not tons and tons, but we have been getting questions about this,” said Jean Daniel, a spokeswoman for the Department of Agriculture, which overseas the food stamp program now known as the Supplemental Nutrition Assistance Program.

When cases like Milota’s began popping up in Iowa recently, officials called Washington, asking what to do.

“We were told we were interpreting the food stamp regulations correctly,” said Roger Munns, spokesman for the Iowa Department of Human Services. “Once you’re over the income limit, regardless of the reason, you’re no longer eligible.”

Once handed out as paper vouchers, food stamps are now delivered to people near the poverty level through debit cards that they can use to buy food. A record 32.5 million people participate in the program. Once the government determines someone is eligible, officials use a formula to calculate the monthly benefit, which ranges from $16 to $588. The average is about $111.

Because those close to the income limit tend to get less money in food stamps, Munns said most people who are bumped out of the program by the extra $100 in unemployment benefits each month will break even or fare just slightly better. But the stimulus checks were intended to ease the effects of the recession, not simply cancel out another government assistance program.

Lawmakers crafting the stimulus knew this would become a problem, said Stacy Dean, director of food assistance policy at Center on Budget and Policy Priorities, a liberal think tank. They could have headed it off by raising the income tax or declaring that the $25 stimulus checks would not affect food stamp eligibility. Both were expensive options that could have forced states to reprogram their computer systems.

But more importantly, hashing out those details would have taken time.

“People were aware of this but, as you recall, the stimulus was moving along and then it was passed in about a day,” Dean said. “There was not a lot of policy discussion on this.”

Milota said he had never been on food stamps before and resisted applying for months, believing he would find a job. But that has proved difficult. When he applied for a customer service job recently, he said the company told him there were 1,000 applicants.

The stimulus law was intended not just as a jolt to the economy but also to ease the burden on people in Milota’s situation. Besides unemployment benefits, the law also increased food stamp benefits — just not the income cap.

“I truly believe when it came out, they felt it was to help people, and they never wanted to hurt people,” said Milota, who says he leans Republican but voted for Obama.

Officials in Washington say they’re aware of stories like this. Changing things, however, requires changing the law. States could do this one by one, or Congress could do so.

“This is not something the president or this agency could do independently,” Daniel, the Agriculture Department spokeswoman, said.