25 years ago I was in the big earthquake 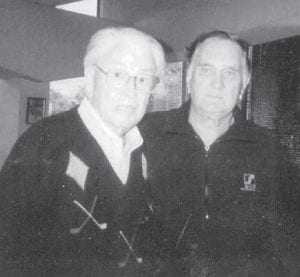 At 3: 20 a. m., Sunday, August 24, a shockwave lasting about 15 seconds rocked me from my bed and woke me from a sound sleep. I was surprised that I was not scared.

I got up, turned my light on, walked through my house looking for broken glass, my pictures falling down, cracks in the walls, and found no damage. Some of my neighbors gathered on the street to make sure everyone was all right. I live alone since my children have left their nest.

It was some time before the news about the earthquake came on TV, and my kids started calling their dad to see if he was okay.

I started thinking about the big one I was caught in 25 years ago in the middle of San Francisco while I was doing some business for Syar Industries of Napa, Calif., the company I worked for, for 49 years after I retired from the Air Force.

I was on my way out of the city, trying to get on the Bay Bridge in bumper-tobumper traffic when the earthquake hit.

The part of the bridge that I would soon be driving on had fallen into the San Francisco Bay. All traffic was at a standstill for about three hours until the police with a loudspeaker had us turn around to head south to Foster City, so as to cross San Francisco Bay on the San Mateo Bridge into Hayward, Ca.

We were then to head north toward Oakland, and then it was only 50 miles to my office in Napa.

During the hours I was in San Francisco, my boss, C.M. Syar, who was like my second father, knew about the earthquake and was very worried about me, along with the hundreds of employees I worked with.

I always had a radio in the vehicle I drove to keep in touch with my office, and they with me. Mr. Syer started calling me on his radio, and sometimes we could not hear other.

Once I got out of the city, they could hear me tell them I was okay and that I was on my way back to Napa.

When I returned to my office at Syar Industries, all the employees came out to the parking lot when I drove in to welcome me. Now they knew I was safe.