$25,000 bond set for man who was shot here after chase through 2 counties 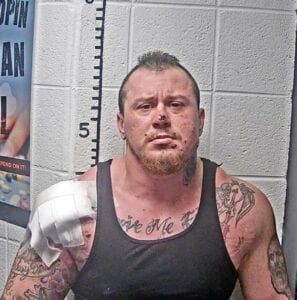 A Letcher County man shot during a police chase on January 21 is now in the Letcher County Jail in lieu of a $25,000 bond after being released from the hospital.

Jared Nicholas Ratliff, 28, of Jenkins, was shot in the shoulder during the early morning chase, which ended when he wrecked his vehicle at Bottom Fork. He had been scheduled for arraignment Monday morning, but missed that court date after he had to be returned to the hospital. He was back in jail Monday afternoon. Bond was set at $25,000, but he has not yet entered a plea.

Kentucky State Police shut down US 119 South for much of the morning of January 21 after a Whitesburg Police officer’s cruiser was struck by the pursued vehicle at a roadblock, and officers opened fire.

The pursuit began before 1:30 a.m. at Baxter just outside Harlan when KSP Trooper Matthew Barger answered a harassment complaint and attempted to stop the vehicle driven by Ratliff, said KSP Trooper Shane Jacobs, spokesman for Post 10 in Harlan. Jacobs said Ratli. refused to stop and troopers from Post 10 chased the vehicle into Letcher County where KSP Trooper Michael Burton of Post 13 in Hazard picked up the pursuit about 2 a.m. and chased the black Chevy Tahoe across Pine Mountain on US 119 South.

After two Whitesburg Police officers set up a roadblock at the junction of US 119 and Pert Creek Road, at the bridge near McDonald’s, the vehicle struck one of the cruisers at the roadblock, and both Whitesburg officers fired their weapons.

The shots struck the driver and blew out one of the vehicle’s tires. Burton continued the pursuit north on US 119 through Mayking at speeds of up to 88 miles per hour. The vehicle finally came to a stop when it hit an embankment near the intersection of US 119 and KY 3406 (Bottom Fork) after the tire shredded.

Ratliff was transported by ambulance to Whitesburg Appalachian Regional Hospital with at least one gunshot wound to the right shoulder. He was transferred to Pikeville Medical Center for treatment of what KSP Trooper Matt Gayheart described as non-life-threatening wounds, and was released from the hospital on Friday and placed in the Letcher County Jail. Ratliff has been charged with first-degree wanton endangerment.

The police officer who was struck by the vehicle apparently was not seriously injured.