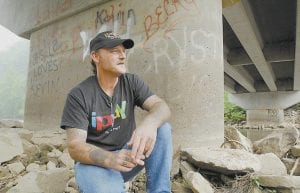 UNDER THE BRIDGE – Steve Dotson sat recently under the bridge in Gilbert, W.Va., where he lived when he was addicted to prescription painkillers. The Gilbert resident has been clean for over six years. Dotson is one of millions of Americans who has felt the harm that can come with addiction to the prescription narcotic hydrocodone. (AP photo/Jeff Gentner)

About 17 percent of Letcher County’s 155 bridges are rated “structurally deficient,” according to 2006 statistics from the Federal Highway Administration.

A bridge is typically judged structurally deficient if heavy trucks are banned from it or there are other weight restrictions, if it needs immediate work to stay open or if it is closed. In any case, such a bridge is considered in need of considerable maintenance, rehabilitation or even replacement.

At least 73,533 of 607,363 bridges in the nation, or about 12 percent, are classified as structurally deficient, including some built as recently as the early 1990s, according to the Highway Administration’s statistics.

Despite those numbers, the head Safety Board said people shouldn’t fret about general bridge safety across the country. 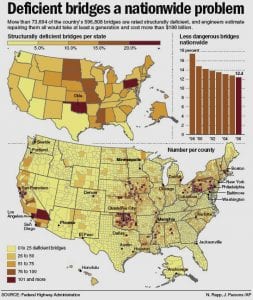 “I don’t believe that they should be worried at all,” NTSB Chairman Mark Rosenker said from the scene of the collapse last week of an interstate highway bridge in Minneapolis.

“Rules that have been put into place as a result of a recommendation that we made some 30 years ago have improved the conditions and the standards that in fact these things are being inspected on,” he said. “But with that said, as a result of this catastrophic disaster, we’re going to be looking at the rules and finding out in fact if they should be tightened, made more stringent.”

Concern about bridge safety has increased in the wake of that bridge span collapse in Minnesota, and figures show repairing all bridges considered structurally deficient would more than $188 billion. That works out to at least $9.4 billion a year over 20 years, according to the American Society of Civil Engineers.

The bridges carry an average of more than 300 million vehicles a day.

It is unclear how many of the spans across America pose actual safety risks. Federal officials alerted the states to immediately inspect all bridges similar to the Mississippi River span that collapsed.

In a separate cost estimate, the Federal Highway Administration has said addressing the backlog of needed bridge repairs would take at least $55 billion. That was five years ago, with expectations of more deficiencies to come.

It is money that Congress, the federal government and the states have so far been unable or unwilling to spend.

“We’re not doing what the engineers are saying we need to be doing,” said Gregory Cohen, president of the American Highway Users Alliance, an advocacy group representing a wide range of motorists.

“Unfortunately when you consistently underinvest in roads and bridges . . . this is the dangerous consequence,” Cohen said of deadly bridge collapse on Aug. 1. He said engineers have estimated $75 billion a year is needed just to keep highways and bridges from further deterioration, but only around $60 billion a year is being provided.

The federal government provides 80 percent of the money for construction, repair and maintenance of the so-called federal-aid highway system including interstate highways and bridges. But states set priorities and handle construction and maintenance contracts.

The federal government is now providing about $40 billion a year to improve and expand the nation’s highways and bridges.

The main source of revenue for roads and bridges, the federal highway trust fund, is failing to keep up with spending demand. The 18.3 cents per gallon of gas in federal taxes hasn’t changed since 1993, and the demand for more fuel-efficient vehicles could affect fuel consumption.

Funding isn’t the only issue getting attention after the Minnesota collapse.

Transportation Secretary Mary Peters said in an interview with The Associated Press that she had asked her department’s inspector general to evaluate the agency’s overall bridge inspections.

Among counties with more than 100 bridges, the problem appears to be most significant in the Midwest. In Nemaha County in southeastern Nebraska, about 58 percent of 194 bridges are structurally deficient. More than 55 percent of neighboring Pawnee County’s 188 bridges are in the same shape. Of the 10 worstoff counties with significant numbers of bridges, seven are in Oklahoma or Nebraska.

On the other end of the scale, at least 10 counties with a significant number of bridges have none that are structurally deficient, according to the latest government statistics. A half-dozen of those are in Texas.