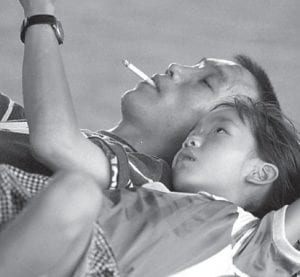 A Chinese man smoked a cigarette while reading to his daughter, under an overpass in Beijing. Second-hand smoke kills more than 600,000 people worldwide every year, according to a new study. In the first analysis of the global impact of second-hand smoking, researchers analyzed data from 2004 for 192 countries. (AP Photo)

Secondhand smoke kills more than 600,000 people worldwide every year, according to a new study.

In the first look at the global impact of secondhand smoking, researchers analyzed data from 2004 for 192 countries. They found 40 percent of children and more than 30 percent of non-smoking men and women regularly breathe in secondhand smoke.

Altogether, those account for about 1 percent of the world’s deaths. The study was paid for by the Swedish National Board of Health and Welfare and Bloomberg Philanthropies. It was published Nov, 26 in the British medical journal Lancet.

“This helps us understand the real toll of tobacco,” said Armando Peruga, a program manager at the World Health Organization’s Tobacco-Free Initiative, who led the study. He said the approximately 603,000 deaths from secondhand smoking should be added to the 5.1 million deaths that smoking itself causes every year.

Peruga said WHO was particularly concerned about the 165,000 children who die of smoke-related respiratory infections, mostly in Southeast Asia and Africa.

“The mix of infectious diseases and secondhand smoke is a deadly combination,” Peruga said. Children whose parents smoke have a higher risk of sudden infant death syndrome, ear infections, pneumonia, bronchitis and asthma. Their lungs may also grow more slowly than kids whose parents don’t smoke.

Peruga and colleagues found the highest numbers of people exposed to secondhand smoke are in Europe and Asia. The lowest rates of exposure were in the Americas, the Eastern Mediterranean and Africa.

secondhand smoke had its biggest impact on women, killing about 281,000. In many parts of the world, women are at least 50 percent more likely to be exposed to secondhand smoke than men.

While many Western countries have introduced smoking bans in public places, experts said it would be difficult to legislate further.

“I don’t think it is likely we will see strong regulations reaching into homes,” said Heather Wipfli of the Institute for Global Health at the University of Southern California in Los Angeles, who was not connected to the study. She said more public smoking bans and education might persuade people to quit smoking at home.

In the U.K., the British Lung Foundation is petitioning the government to outlaw smoking in cars.

Helena Shovelton, the foundation’s chief executive, said smoking parents frequently underestimate the danger their habit is doing to their children.

“It’s almost as if people are in denial,” she said. “They absolutely would not do something dangerous like leaving their child in the middle of the road but somehow, smoking in front of them is fine.”
Online:
www.lancet.com
www.who.int/tobacco/en
www.lunguk.org