3-D TV failing to catch on 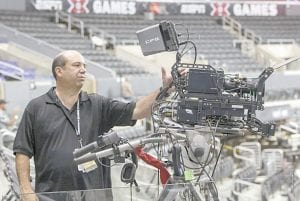 ESPN coordinating producer Phil Orlins showed a 3-D camera set up used by ESPN 3-D Network coverage at the ESPN X-Games held at the Staples Center in Los Angeles earlier this year. Only 2 percent of TVs in American homes were able to show 3-D last year, according to IHS Screen Digest. That’s about 6.9 million sets out of 331 million installed. (AP Photo)

Phil Orlins knows everything about producing TV in three dimensions. The ESPN producer has captured the undulating greens of Augusta National and the flying motor bikes of the X-Games for ESPN’s 3-D channel. But he can only guess how well his shows resonate with viewers. That’s because 3-D audiences are so small they can’t be measured by Nielsen’s rating system.

“The feedback on The Masters was fast and furious. You could go on Twitter at any moment, and there’d be comments coming in every minute about 3-D coverage,” said Orlins while giving a tour of a production truck at this summer’s X-Games. “But then you go to some other events where it’s pretty quiet.”

Orlins’ problem is that fewer than 115,000 American homes are tuned into 3-D channels at any one time. That’s less than a hundredth of the 20.2 million-strong audience that saw television’s highest-rated show, “NCIS,” last week. 3-D viewership is so tiny that The Nielsen Co.’s methods are unable to capture any meaningful data about viewers’ programming preferences.

ESPN 3D is one of nine 3-D channels that launched in the years following the late 2009 release of James Cameron’s “Avatar.” The 3-D blockbuster won three Oscars and ranks as the highestgrossing film of all time, garnering $2.8 billion at the global box office.

“Avatar” was supposed to change everything. Enthusiastic television executives expected the movie to spur 3-D’s transition to American living rooms, boosting sales of TVs and, they hoped, getting people to pay for 3-D channels.

Only 2 percent of TVs in the U.S. are able to show 3-D programming, according to the most recent data from research firm IHS Screen Digest. That’s about 6.9 million sets out of 331 million. After this year’s Christmas buying rush, IHS expects the number of 3-D-capable televisions in homes to jump to 19.3 million, mostly because many new larger TVs automatically include the technology. If you’re in the market for a big-screen TV, you’re likely to wind up with 3-D, too. Even so, 3-D TVs will amount to fewer than 6 percent of all sets.

“We’ve learned with every passing day that we were ahead of the curve further than we thought we were,” said Bryan Burns, the business leader for ESPN 3D. “We hit the on-ramp earlier than we realized at the time.”

At movie theaters, 3-D has attracted lots of viewers. But not at home. There’s a supply problem: 3-D TV is expensive to produce, so there’s not a lot of it. Of the content out there, some isn’t very good. There’s an equipment problem: Some people find the special glasses required for 3-D TV uncomfortable. And there’s a money problem: Many wonder if it’s worth the extra cost.

“It was kind of fascinating to me, but it’s not all there,” said Tim Carter, a graphic designer in Sarasota, Fla., who bought a large 3-D TV with other high-end features last year for about $1,800.

Today, the average 42- inch 3-D television costs about $900, according to IHS — about $200 more than similar-sized, more basic models. A 3-D TV tends be more expensive because 3-D is one feature common to TVs with bigger screens. It is usually grouped with other upgrades that matter more to consumers, including motion-smoothing technology and light-emitting diodes that are more energy-efficient and display color contrast better than traditional liquid crystal display sets.

A 3-D TV contains a high-tech chip and software that translates 3-D video feeds into the right- and left-eye images that create the 3-D effect for people wearing the right glasses. In some cases, special glasses can cost an extra $50 or so.

Watching home movies on disc requires a 3-D Blu-ray player that can cost another $120, and each set of 3-D Blu-ray discs costs about $27, according to IHS.

TV distributors now don’t charge specifically for channels like ESPN 3D. But 3-D channels are only “free” if you’re already paying up for a pricey package. They’re bundled with add-ons like HD service and high-definition digital video recorders. For a DirecTV subscriber, for example, that means a $200 high-definition digital video recorder and $10 per month for HD service.

All that for the privilege of watching 3-D at home in your pajamas.

Because of the cost, Carter said he’s mainly sampled free 3-D movie trailers provided on-demand by his cable TV company. A trailer for the latest “Transformers” movie didn’t make him more enthused. “One of the robots pops out at you, and it felt forced.” He said that 3-D effects aren’t noticeable much of the time. While he said he’s not knocking the technology, he’s disappointed with the way it’s being used.

Sluggish demand for 3-D on TV has caused programmers to hit pause on rolling out new shows and channels.

In June, DirecTV turned its 24-hour channel, n3D, into a part-time network that only shows special event programming like the Olympics, in part to avoid the heavy use of reruns caused by a lack of new material. Last year, AT&T dropped ESPN 3D from its lineup, saying the $10 per month cost to subscribers wasn’t justified given low demand.

So far, ESPN 3D is the most aggressive network in terms of shooting original 3-D productions. It has about 140 per year. It also has the widest distribution, according to research firm SNL Kagan, no doubt because popular sports network ESPN includes it in negotiations with distributors. Though few own the hardware to watch the channel, ESPN 3D now pipes into 60 million U.S. homes.

Without extra subscriber fees, though, it could be difficult to make a big business out of 3-D production, especially because it’s more expensive than 2-D. Every 3-D camera set-up requires two cameras. They have to be mounted on a special computerized rig that aligns them. And someone in a back room has to adjust a knob that determines how cross-eyed the lenses are. That can require twice the manpower for the same camera position, boosting costs when revenues aren’t going up very much.

Advertising, the other pillar of the TV channel business, is also hampered because of the lack of audience data.

That has resulted in an odd arrangement. Companies that run advertisements on ESPN 3D, like movie studios, actually have their ads played a second time in 2-D on ESPN and other channels so they can meet their goal of reaching a measurable number of people, Burns said. That uses up 2-D commercial airtime that might have been sold to other customers.

3-D TV is not a complete bust. While he wouldn’t say if it’s profitable, Burns said ESPN 3D is still a revenuegenerating business that is “doing well,” because of how the network accounts for revenue from distributors and advertisers. Burns and others expect that as more TVs are sold with the capability, the more viewership will grow, just like it did for high-definition sets and programs a few years ago.

“It took five years before reporting systems caught up and we knew who actually had the service,” Burns said of the launch of HD. “It’s not unfamiliar territory to us.”

For TV signal providers, carrying 3-D channels before they really become mainstream wins them points with their savviest technophile customers, the kind who jumped on the HD bandwagon early —a decade ago.

In many ways, though, the comparison to HD isn’t a good one.

Watching 3-D is a problem for about 6 percent of Americans with certain eye problems, according to Dr. Dominick Maino, a professor with the Illinois College of Optometry. They simply can’t see in 3-D or suffer dizziness or nausea when watching.

And it won’t get the same push that HD got by the hundreds of TV stations that switched to high-definition broadcasts in the last few years.