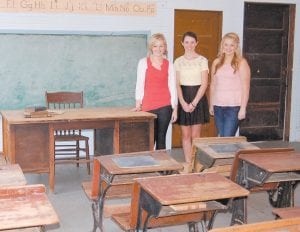 Cassidy and Kennedy Breeding and Abby Frazier have recently spent about 10 hours cleaning a storage room at the center. The trio said the door wouldn’t completely open when they first started, but after lots of moving and dusting the room resembles a 1940s era classroom, complete with wooden desks and slate chalkboards.

“That is something that we are really passionate about and we have really been working hard on,” said Kennedy Breeding.

The Breedings spent five days at Lindsey Wilson in Columbia during the end of June for a Rogers Scholars summer session.

“There we learned some amazing things about community service,” said Kennedy Breeding. “ That’s when we realized everyone should strive to make a positive impact on their community. We also heard that the community center was going through a hard time and they were having a hard time getting people here for the square dances.”

Jon Henrikson said about 30 to 50 people have been attending the square dances, which are held from 7 to 9 p.m. the second Saturday of each month from April to November. He would like to see the number of participants increase to at least 75 to more than 100.

“We have had square dances here nonstop since the mid ’60s,” said Henrikson. “As time goes on there seems to be fewer and fewer people. We are interested in keeping square dancing alive.”

Henrikson said the square dances started mainly as a way of raising money to help pay for the improvements and the upkeep of the building.

Dale Johnson said the Carcassonne square dance itself is the oldest, longest running community square dance in Kentucky and maybe the US.

“This is recognized by people in Washington, the Smithsonian, the Library of Congress and also the National Endowment for the Arts,” said Johnson. “Those people are all aware of the Carcassonne Square Dance.”

Members of the Carcassonne Square Dance were invited to dance on the Mall in Washington during the Folklife Festival in 2003.

“We try to do the dancing very similar to what was done in the 18th century in this area,” said Johnson. “And at that time people would just clear out rooms of the house and invite people over and they would dance all night long. People would go home when the sun came up. You only got to dance if you worked that day.”

Lee Sexton, a banjo player, has been providing music for the square dances for about 40 years.

“ I’ve enjoyed every square dance I have done,” said Sexton.

“No drinking,” Sexton added. “No profane language or out the door they go.”

Henrikson came to Carcassonne in the mid ‘60s as an Appalachian volunteer through the VISTA program.

“We took upon ourselves to help the community restore this building,” said Henrikson, who taught two years in the one-room schoolhouse.

“When I came to Carcassonne there weren’t any windows in this room and the floor had holes in it,” said Henrikson. “The other room wasn’t in good shape either.”

The structure, built in 1931, served as a public school until the 1970s and was purchased by the Letcher County Fiscal Court about a decade ago and became the Carcassonne Community Center.

“This community center is basically the heart of this community,” said Henrikson. “We love living here and we want to keep this going and actually make it better than it has been in the last few years.”

Kennedy Breeding said the volunteer project has been a labor of love.

“We really invested our time and hard work into this place,” she said.

The Breedings and Frazier are organizing an event at the community center on August 10. A dinner will be held on the grounds from 5 to 7 p.m. and a square dance will begin at 7 p.m. Regional music and a health expo will be part of the festivities.

This week, the Letcher Fiscal Court approved a request to declare August 10 as Carcassonne Square Dance Day in Letcher County.

The vote came after Henr ikson and Johnson approached the court and said that Mountain Comprehensive Health Care will sponsor a health fair in conjunction with the event and talked about the work being done by the Breeding sisters and Miss Frazier.

Admission to the August 10 event is $5 for teens and adults. Admission for children age 5-12 is $3 and children under four are free.