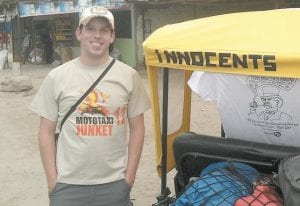 Whitesburg native Dillion Asher and two of his friends will participate in a 9,000-mile road rally between the United Kingdom and the Asian country of Mongolia riding in one of the smallest automobiles manufactured. Asher is the son of James D. and Shirley Asher of Whitesburg.

Former Whitesburg resident Dillion Asher has stored all of his belongings from his apartment in Fort Collins, Colo., and taken a three-month leave of absence from his job so he can spend about 40 days competing in the Mongol Rally, a long-distance car race that begins in the United Kingdom and ends 9,000 miles later in the Asian country of Mongolia.

Teams competing in the Mongol Rally must travel across some of the world’s most dangerous roads in a “supermini” compact car with an engine of less than 1.2 liters. Teams can choose to ride motorbikes instead, but the bike engines must be less than 125cc. The vehicle chosen by Asher and the other two members of “Team Innocents Abroad” is a 1061cc Suzuki Alto GL that averages 57 miles per gallon of gas.

Asher, the son of James D. and Shirley Asher of Whitesburg, is teaming with girlfriend Lisa Brignoni and their friend Sledge Simmons, also of Fort Collins for the charity fundraising event. The three hope to raise a total of $5,000 for three nonprofit organizations including Cool Earth, which works to protect the world’s rainforests and is the rally’s official charity. Funds raised will also go to Practical Action, a charity that works in developing countries, and Women’s Global Empowerment Fund. So far, Asher, Brignoni and Sledge have raised $1,700. 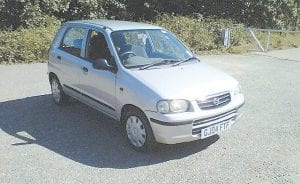 Dillion Asher and the other two members of Team Innocents Abroad hope this 1061cc Suzuki Alto GL holds up for a 9,000-mile trip from the United Kingdom to Mongolia.

The Mongol Rally begins July 13 at Goodwood Circuit, a racetrack near Chichester, West Sussex near England’s South coast, and ends in Ulan Bator, Mongolia. Depending on the route a team chooses, the distance of the rally can be as long as 10,000 miles.

The event is sponsored by The League of Adventurists International Ltd., a UK-based company that says it is “not just hell bent on fighting to make the world less boring but also raising massive buckets of cash for charities.” Usually 250 to 300 teams participate in rallies administered by The Adventurists, said Asher.

Vehicles driven in the rally can be no older than nine years since they will be auctioned off (with funds benefitting Cool Earth) and left in Mongolia.

“It provides a source of decent used vehicles for the local population there,” Asher said of the landlocked country that is bordered by Russia to the north and China to the south, east and west.

Mongolia is the world’s 19thlargest country behind Iran and ahead of No. 20 Peru. To get there from the UK, Asher and Brignoni have chosen a 9,000-mile route through 18 European and Asian countries.

Asher sees the adventure as “an opportunity to give something back to a world that gives so much to us.”

Asher is a graduate of Virginia Tech and the University of Southern Mississippi, where he studied geology. He is a field engineer for an oil and gas company and has been preparing for the Mongol Rally since spring of 2011 by blogging on the topic, reading books and researching the idea.

As part of another charity fundraising “adventure” offered by The League of Adventurists, Asher and Simmons spent three weeks last September riding 1,720 miles through the South American country of Peru in a “mototaxi,” a three-wheeled, small motorbike with a cover and sofa-like seating attached to the back. That tour, also unguided, took them high in the Andes Mountains and through the Amazon basin.

Brignoni is a travel blogger (globallymisguided.com) who has written about an eight-month expedition she made to South America. Team Innocents Abroad is also the name of a nonprofit organization created by Asher, Brignoni and Simmons.

The three will leave Colorado for Iceland on June 22 and then head to the Netherlands. They will arrive in England on July 2 to prepare their compact car for the adventure.

Asher will write about their experiences along the trip. Charitable donations can be made to Asher and his team at www.teaminnocentsabroad.org. Asher said if people want to donate to a charity other than the chosen three, they may do so.

“The whole idea is to encourage participants to raise money for charities,” said Asher.

The trip from the United Kingdom to Mongolia does not come without risk, as Asher, Brignoni and Simmons and other teams will face some of the most remote desert and mountain roads imaginable.

While pointing out the rally “is an adventure, not a wimpy guided tour,” The League of Adventurists refers to the event as “a genuinely dangerous thing to do.”

“This is not a glorified holiday,” a warning on the Adventurists’ website says. “It’s an unsupported adventure and so by its very nature extremely risky. You really are on your own and you really are putting both your health and life at risk. That’s the whole point.”