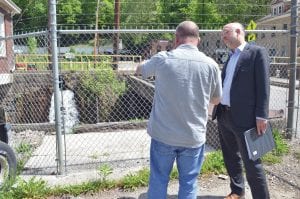 White House advisor Jason Walsh, right, visited Lynch on Tuesday as part of his information sharing tour about the POWER Initiative expected to be available.

The Obama administration this week announced $ 35.5 million in grants aimed at helping communities suffering from the downturn of the Central Appalachian coal industry.

The funding is part of the Partnerships for Opportunity and Workforce and Economic Revitalization (POWER) Initiative led by the Department of Commerce with participation from the Department of Labor, Small Business Administration and Appalachian Regional Commission.

Other participants include the U.S. Labor Department, which has $20 million available; the Small Business Administration, up to $2.5 million; and the Appalachian Regional Commission, up to $500,000.

“Recent changes in the energy economy have had a profound impact on Appalachian families and communities that have been sustained by the coal industry for generations,” Labor Secretary Thomas Perez said as he announced the grant at the Shaping Our Appalachian Region (SOAR) Strategy Summit in Pikeville on Monday. “We have a moral imperative to work together to ensure we all succeed. That’s what the POWER Initiative is all about — developing truly cohesive relationships at the federal, state and local level to create real economic opportunities for families throughout the region.”

On Tuesday, Jason Walsh, a senior economic policy advisor to the White House, shared information about what the Obama Administration is doing to support transition work in eastern Kentucky and Central Appalachia, including the POWER Initiative and POWER+ Plan, which were announced earlier this year.

The proposed POWER+ Plan could release $1 billion in federal Abandoned Mine Lands funds for use on economic transition projects in the region. Walsh said that money could be used to put eastern Kentuckians back to work reclaiming former mined lands in ways that would stimulate and support economic development. Through the POWER Initiative, the Administration has already secured the use of millions of already appropriated federal funds for economic and workforce development projects in eastern Kentucky.

“Hopefully we can all agree that communities that are among our nation’s most economically distressed and who have helped keep the lights on for this country deserve help from the federal government in their time of need,” Walsh said after taking part in a panel discussion at Benham in neighboring Harlan County. “These ideas represent one step. We want to take a bunch of steps. We don’t have any time to waste. We’ve got a lot of folks who are struggling. We need to do as much as we can as soon as possible.”

Walsh’s appearance was the first official visit by a White House advisor to the region since the announcement of the administration’s POWER Initiative and POWER+ Plan, which are aimed at increasing economic growth in the region.

Walsh also attended the second SOAR summit in Pikeville on Monday before touring Benham and Lynch the next day. There, he heard from more than 50 organizations and community leaders about economic transition projects and efforts already underway in the region.

“We are trying to include some kind of energy efficiency measures in every house we work on,” Enlow said. “It’s an essential part of helping people be able to afford to keep their homes, stretch their dollars, and keep their money circulating in the local community.”

Deyvon Creech, a young artist from Harlan County, described the value of her experience working with the Higher Ground Community Theater project.

“We go into communities in Harlan County, collect oral histories, and then transform those stories into community theater. Our most recent production was called Find A Way. The focus was to open up dialogue in the community about economic transition. ”

Ada Smith spoke about workforce development initiatives developed by Appalshop in Whitesburg to provide young people in the region with media, communications and technology skills and help them access college credits and other professional certifications.

“The idea a small grant from the federal Office of Economic Opportunity can create an organization that has sustained itself and employs more than 20 people nearly 50 years later is an incredible success story,” Smith said.

Walsh visited with community leaders in Lynch to learn about community revitalization efforts there. Leaders shared the history of the community, and then gave a glimpse of the legacy impacts of abandoned coal mines. Two recent mine blowouts in less than two months have left the residents of Lynch without drinkable water.

Throughout the day Tuesday, community members, local leaders and nonprofit groups shared with Walsh their vision for a brighter eastern Kentucky future — one that could be made significantly more achievable through the POWER+ Plan and POWER Initiative.

“It’s time for us to wipe away our tears and look at ways to diversify,” Harlan County Judge/Executive Dan Mosely told Walsh. “It should have been done 50 years ago. I’m glad it is happening now.”