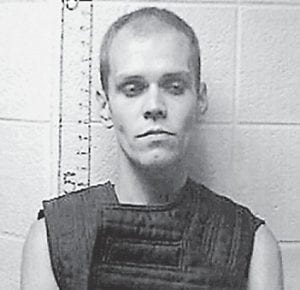 Austin L. Ison was wearing a “suicide smock” when this photo was taken by the Letcher County Jail staff.

A 24-year-old Letcher County man apparently threatened to cause harm to himself after learning he would be the third suspect charged with capital murder in the June beating and arson death of Dradrick “Drad” Fleming.

The suspect, Austin L. Ison, was placed under a “behavioral watch” by Letcher County Jail officials after the unsealing of an indictment late last week that charges Ison with helping Fleming’s wife, Stephanie Yvonne Jones Fleming, and her lover, James L. Maggard, both plan and carry out the murder and kid- napping of Drad Fleming.

The indictment charging Ison with complicity to murder, complicity to arson, complicity to kidnapping, complicity to tampering with physical evidence, and hindering prosecution was unsealed in Letcher Circuit Court on August 9, two weeks after the Letcher County Grand Jury heard additional testimony from Letcher Sheriff ’s Lt. Brian Damron concerning the investigation into the death of Mr. Fleming, a 34-yearold coal miner from Millstone and father of three.

The indictment, which Letcher Commonwealth’s Attorney Edison G. Banks II had asked to be kept secret until after Ison’s arrest, charges that Ison committed criminal complicity to murder under aggravating circumstances “by aiding, assisting, planning or conspiring with” Mrs. Fleming and Maggard to “wantonly (cause) the death of Drad Fleming by beating Mr. Fleming and then placing the badly-beaten and semi-conscious body of Mr. Fleming inside Mr. Fleming’s pickup truck, which defendant James Maggard then set on fire and thereby caused the death of Drad Fleming.”

Ison, of Pert Creek near Whitesburg, befriended Stephanie Fleming when the two worked at the Whitesburg Pizza Hut, sources told The Mountain Eagle. The two remained close, the sources said, after Mrs. Fleming left Pizza Hut and was hired to work at the McDonald’s restaurant located directly across KY 15, where Mrs. Fleming, 30, later began an affair with the 33-year-old Maggard.

During a preliminary hearing for Mrs. Fleming and Maggard in Letcher District Court on June 28, Lt. Damron testified that Ison told authorities he had been “privy to a conversation” in which he heard Maggard and Mrs. Fleming discuss killing Mr. Fleming with a baseball bat and making his death look like an accident.

Damron testified that while Ison claimed he thought the two lovers were just joking about murdering Drad Fleming, investigators had reason to believe that Ison’s involvement in the homicide was greater. Damron testified that Ison had worked “in and around the funeral business,” and apparently told Mrs. Fleming and Maggard that a body would have to be burned at 1500 degrees Fahrenheit to reach the cremation stage that would keep the cause of death from being known.

Damron also testified that Ison, a mortuary school graduate, had voluntarily submitted to a polygraph examination at Kentucky State Police headquarters in Frankfort in days just after Drad Fleming’s body was recovered, and that Ison had surrendered his computer to the sheriff ’s department to allow investigators “to see if any research” had been done pertaining to the crime.

Additionally, Damron testified that Ison told police that Mrs. Fleming had stopped by Ison’s home on the night her husband was killed and asked him to accompany her as she drove across Pine Mountain and on to Black Mountain, where she allegedly took a change of clothes and cleaning supplies to Maggard before giving him a ride back to the Whitesburg area in a new automobile her husband had recently bought for her in hopes of reconciling their troubled relationship. In the end, Ison did not make the trip to the Franks Creek area of Eolia with Mrs. Fleming. He told authorities he had decided to stay at his home, located near the foot of the Whitesburg side of Pine Mountain, and finish watching a movie instead.

The grand jury charges that Ison committed complicity to firstdegree arson by conspiring with Mrs. Fleming and Maggard to burn Drad Fleming’s 2011 Chevrolet Silverado pickup, and that Ison also conspired with the two other defendants to kidnap Mr. Fleming.

The grand jury’s charge against Ison of complicity to tampering with physical evidence apparently stems from allegations that Ison erased the hard drive on his computer before surrendering it to authorities.

According to Damron’s testimony, Ison was also present with Mrs. Fleming and Maggard in the Flemings’ mobile home near Millstone when police went there on the night before Drad Fleming’s body was found to respond to a complaint about a loud party. Because Ison allegedly chose not to share information about the crime police say he knew at the time, the grand jury also charged him with first-degree hindering the prosecution of apprehension of Mrs. Fleming and Maggard.

At presstime, Ison was still being held in the Letcher County Jail, where bond was set at $250,000. He is scheduled to be arraigned on the charges contained in the indictment on Sept. 12 at 9 a.m.

Ison, Maggard and Mrs. Fleming could end up on Kentucky’s Death Row if they are convicted on the charges of which they are accused. Mrs. Fleming and Maggard both pleaded innocent to capital murder charges at an arraignment in Letcher Circuit Court on August 7.

Drad Fleming’s badly burned body was found in his pickup on the afternoon of June 23 after Maggard walked into the Letcher County Sheriff ’s Office and confessed to killing Fleming. Maggard then led police to the site of Fleming’s body near a mine site on Black Mountain near Eolia.

Maggard told deputies he beat Fleming, who worked as an underground coal miner, with a baseball bat, and said the incident occurred on Pine Mountain near Whitesburg after Fleming confronted him with the bat. Investigators say the beating was an ambush which took place near the Flemings’ mobile home near Millstone on the night of June 20, and that Maggard then drove a still-alive Fleming to the mine site near Franks Creek before pouring an accelerant on Fleming and the truck and setting them both afire.

Video surveillance taken from a coal mine near Little Fork of Franks Creek shows Fleming’s truck driving by the mine site at a high rate of speed at 10:15 p.m. on June 20. The same recording shows Maggard walking back down the same road one hour and 37 minutes later. Maggard’s cousin, who works at a nearby mine site, told police that Mrs. Fleming showed up a short time later and brought cleaning supplies and clean clothes to Maggard, who then washed and changed into the clothes in a guard shack.

Police still haven’t found the bat used in the assault on Drad Fleming or the bag containing the clothes James Maggard was wearing.