4 charged in scheme to get meth from hospital into jail 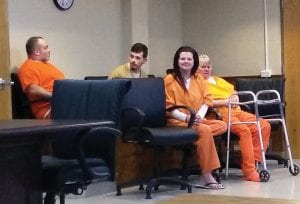 HEARING WAIVED — From left, Anthony Tucker, Charles Osborne, April Anita Baker, and Vickie Anita Baker sat in the Letcher District Courtroom Tuesday before waiving their rights to a preliminary hearing. The meth-related charges against them have been referred to the Letcher County Grand Jury. (Photo by Sam Adams)

Four people charged under the state’s organized crime statute for an alleged scheme to smuggle drugs into the Letcher County Jail have pleaded not guilty and waived their rights to preliminary hearings.

Their cases will go straight to a grand jury for possible indictment.

Anita Vickie Baker, 58, of 352 Pine Creek, and her daughter, April Anita Baker, 40, of the same address, were arrested after jail officials learned of an ongoing operation smuggling methamphetamines and other drugs through “dead drops” at Whitesburg Appalachian Regional Hospital.

According to Jailer Bert Slone, the Bakers and an unknown male would visit the emergency room and stick drugs under a counter while no one was looking. They would then notify inmates, who would feign an illness and get deputy jailers to take them to the ER.

When inmates were giving information to a nurse, they would hide the counter with their bodies, remove the drugs and stick the package down the front of their pants until they were alone, when they would transfer them to their body cavities.

Two prisoners in the jail are also charged in the operation, and Slone

Slone said more arrests are likely. Charles Michael Osborne, 24, of 7924 Highway 119 South at Eolia, and Anthony Ray Tucker, 39, of 8726 Hwy. 160, were already in jail, and were also arrested. Osborne has been transferred to the Pike County Detention Center.

All four were charged with engaging in organized crime, first-degree trafficking in a controlled substance (methamphetamines) greater than two grams, and first-degree promoting contraband.

According to warrants issued in the case, conversations recorded in the jail led Slone and District Court Bailiff Ben Fields to watch the registration desk at the emergency room. While they were there, Tucker is alleged to have faked chest pain and asked to be taken to the emergency room. When he and a deputy arrived, nurses took him straight in, and he did not have time to get the drugs, Slone said. A search of the area turned up a packet hidden under the registration counter, and security video from the hospital showed the two women and an as-yet unknown male taping the drugs there at various times.

According to the arrest warrant sworn by Deputy Jailer Elena Hensley, who helped investigate the case, drugs in the packet included marijuana, Suboxone, gabapentin, and a substance believed to be methamphetamine.

April Baker and Vickie Baker were arrested on the night of December 11 after Kentucky State Police raided the home the Pine Creek home the two women share.