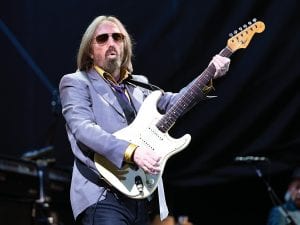 Tom Petty performs with the Heartbreakers in this photo taken during the summer of 2017. Petty’s family and former band members say it was like therapy to compile a four-disc box set of his music. It is now on sale. (AP Photo)

Tom Petty’s family and former band members say it was like therapy to compile a four-disc box set of his music so quickly after he died.

“An American Treasure” went on sale September 28, four days short of a year after Petty died at age 66 of cardiac arrest. He and his band the Heartbreakers had just completed a triumphant concert tour with a show back home in Los Angeles.

“I felt like when Prince died, unfortunately from a similar situation, that there was no central place to grieve for fans or for anyone, to make sense out of the greatness of that artist,” said daughter Adria Petty, an instigator of the box set alongside Petty’s widow, Dana; Heartbreakers Mike Campbell and Benmont Tench; and producer Ryan Ulyate.

It wasn’t like their grief was private. Petty, 43, would hear her father’s music in taxis and out of the windows of buildings she’d pass by. She went to get her eyes checked, and the optometrist broke down in tears.

Their goal was to create a document that reflected Petty as an artist and a man, not just a hitmaker, she said.

“You see a picture of a man that emerges from this box and that man was such a special, complex Southern gentleman,” Petty said. “He’s sort of the best of what you’d call an American. I felt like this was something beautiful to show people.”

Each disc follows a period of time: years as hungry newcomers in the 1970s, the hitmaking period of the 1980s, Petty’s rough 1990s when he dealt with divorce and a heroin addiction, and late-career renaissance in the 2000s.

What’s notable is the consistency of the work, the clarity of the writing. Petty was a rock ‘n’ roll classicist from the beginning and thoroughly loyal: Campbell and Tench followed Petty west from their homes in Gainesville, Florida, and they worked together throughout their lives.

Ten of the songs had never been released in any form, 18 are alternate versions of songs previously released, 14 are live cuts and 18 are songs that had already been on albums or singles. Well-known songs like “Breakdown,” ‘’Even the Losers” and “I Won’t Back Down” are included; others like “American Girl,” ‘’Don’t Do Me Like That” and “Free Fallin’” are not.

That doesn’t mean putting it together was easy. Tench said there were disagreements about what to include. He was initially in favor of a box consisting solely of material that had not been released before.

Petty said her father was a perfectionist, and she could hear his voice in her head as she evaluated songs from the vault.

“We started to pick stuff out and people said, ‘Well, this is kind of cool’ or ‘This is kind of interesting,” she said. “I would just sort of feel him cringing and saying ‘Wait, this is too soon. I just died. Why are you putting stuff like this out?’”

The liner notes are also a voyage of discovery. Keyboardist Tench recalls his anger when he thought he would be called to record a late 1980s album only to be told that no, Petty intended “Full Moon Fever” as a solo disc. Complaining about it to a friend, Tench was told that he now had the time, and no excuses, to enter rehab.

“So ‘Full Moon Fever’ saved my life,” he said in an interview, “by me not being on it.”

It’s not clear whether Petty’s Heartbreakers will ever surface as a unit again. While Petty was obviously the leader, they weren’t a backing band. “It was blood,” Tench said. While they’ve been approached for projects, nothing has felt right. Tench, an in-demand session player who’s plotting a solo album, has a 9-month-old daughter. Campbell has joined Fleetwood Mac.

“If somebody wanted to get together at the place where we used to record and rehearse, the Clubhouse, and play a little, I’d go down for sure,” Tench said. “But as far as being a band? I don’t know what we would do.”