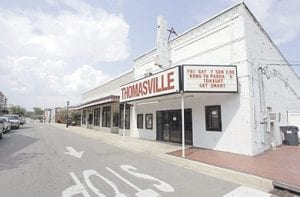 A movie theater in Thomasville, Ala., is seen in this photo. Residents in once-sleepy Thomasville have started complaining about traffic coming from shoppers, squeezed by $4-per-gallon gas, who are staying closer to home instead of driving 100 miles each way to the nearest malls in Mobile or Montgomery. (AP Photo)

Residents in once-sleepy Thomasville have started complaining about traffic jams on Route 43, which runs right through the town.

Much of the new traffic is coming from shoppers, squeezed by $4-per-gallon gas, who are staying closer to home instead of driving 100 miles each way to the nearest malls in Mobile or Montgomery.

“I just don’t drive as much,” said Herman Heaton, a 72-yearold retired lumber mill worker, leaning against a Chevy Silverado pickup that now costs him $80 to fill up. “We don’t go to Mobile as much as we used to for shopping.” Heaton said he now spends about $600 a month on gas, about 10 percent of his income and about double what he spent last year.

Many stores in rural towns – from small independent shops to local chains – are starting to enjoy a little life after years of seeing customers bypass them for distant malls. While it may not reverse the decades-long decline of small-town shopping, it could lead national mall developers and merchants to rethink where to build and challenge a basic tenet of retailing: Build, and shoppers will come from miles away.

“The whole retail logic has been to build big mass stores that drew from a huge distance,” said Robert Robicheaux, an economic development specialist at the University of Alabama. “Now, we need to reconsider that.”

Some small shops in Thomasville, population 5,500, report more customers as shoppers check out local options first instead of heading further away.

“We are out in the middle of nowhere, but we are a unique market away from the metro areas,” said Thomasville Mayor Sheldon Day, a former Wal-Mart store manager who is trying to revitalize the town with additions such as a new civic center and wants to get chains like J.C. Penney and Target Corp. to open locations in town so that residents don’t go elsewhere.

Consumers, Day said, “are buying the basics they need. If you are looking to buy the basics, then you do most of your shopping at home.

City officials in Mobile and Montgomery, meanwhile, say they’re dealing with shortfalls, in part because out-of-towners are staying close to home too.

Tax experts say it’s difficult to apply sales tax data nationwide since different states define sales tax in different ways. But Family Dollar Inc., which operates 30 percent of its stores in rural areas – typical of discount chains – says that its rural locations are outperforming the chain as a whole. And Rita Postell, spokeswoman for the Piggly Wiggly Carolina Co. supermarket franchise chain, which operates 113 locations in Georgia and South Carolina, says that some stores in rural areas near Spartanburg, S.C., have enjoyed a recent rise in sales, after long struggling with declines.

Based on his conversations with store executives, Burt P. Flickinger III, managing director of consulting firm Strategic Resource Group, said other discount and dollar stores are seeing their rural locations doing better than their overall business.

“Rural retail centers are likely to see a lot more traffic as consumers are not willing to make the long commute to the big city,” said Michael Hicks, associate professor of economics at Ball State University in Muncie, Ind.

Hicks has studied the socalled pull factor – a measure of regional retail sales that takes into account local income levels as well as sales per capita – in Muncie and found it was seeing a smaller drop in sales than more urban areas like Indianapolis. That means that consumer spending in rural retail hubs is holding up better.

The decline of rural towns has been fueled by the closing of manufacturing plants and the flight of young adults in search of better job prospects. Some experts say the rapid expansion of discounters like Wal-Mart Stores Inc. into rural areas also clobbered small businesses like local hardware and grocery stores, stripping the town of a diverse mixture of shops.

“For thirty years, we have seen major structural changes that have caused the decline of the rural town,” said Liesel Eathington, assistant scientist in the economics department of Iowa State University. “There are reasons other than travel costs that were leading to the consolidation of trade out of small rural communities and into the larger” urban areas.

But gas prices could be playing a bigger role in changing people’s habits. The high cost of gas takes a toll, especially on rural Americans, who are already struggling with lower average incomes than the overall U.S. population, fewer employment options and a heavy reliance on gas-guzzling vehicles.

In Thomasville, U.S. Census figures show that 20 percent of families live below the poverty line. Residents in Clarke County, which includes Thomasville, spend 9 percent of their takehome pay on gas, compared to the national average of 4 percent, according to a recent study from the Oil Price Information Service. And with pulp and paper mills outside of town among the area’s biggest employers, Day noted that roughly 40 percent of the town’s residents have at least a half-hour commute every day.

Johnny Thomas, 44, a machine operator at a mill in McIntosh, 32 miles from his home in Coffeeville, used to shop 85 miles away in Meridian, Miss., but now limits his trips. Instead, Thomas, who was sitting on a bench outside a restaurant in Thomasville, said now he buys in bulk.

“Mainly, you just have enough gas to just go to work, come back. We aren’t able to go out and do family activities anymore,” he added, noting that his hours have been cut and he now works only four days a week.

But higher traffic in rural town centers like Thomasville may be a sign of what’s to come. Thomasville, which was founded in 1888 and has a cluster of small local clothing and furniture shops in addition to dollar stores, has pulled in more shoppers from much less populated neighboring communities like Pine Hill. While Day says the Wal-Mart in town has always been a magnet for business – a contrast to what other experts believe, he thinks Thomasville’s trading area could stretch to 50 miles from the current 35 miles because of the gas impact. Citing the new traffic jams, Day said he has already seen a 5 percent to 10 percent increase in vehicle count from a year ago.

With a trip to Mobile now costing an average of $40 or $50 just for gasoline, “people can afford to pay 10 or 15 dollars higher for things in Thomasville versus traveling to a metro market, and we are seeing that.”

Reece Armistead, an assistant manager at sporting goods chain Hibbett Sports in Thomasville, noted an 18 percent sales increase from a year ago. Many customers, he said, say that they will order an item online if the store doesn’t have it because they’re not willing to drive to Mobile.

Mike Walters, owner of the three-store chain of Larry Walters Furniture stores, said that he hopes the new interior designer he has hired – a rarity in rural Alabama – will resonate with residents who don’t want to drive to the mall.

“It’s always the perception that the small town can’t compete with the big city, but that’s false,” Walters said. “We can’t have the selection, but we can beat (their) socks off on service. We’re here, and we’re local.”