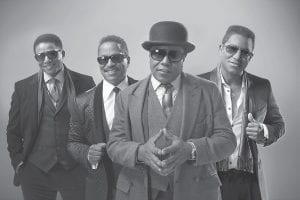 The Jackson brothers, from left, Jackie, Marlon, Tito and Jermaine, from the A&E original series, “The Jacksons: A Family Dynasty,” are shown. The six-hour series premieres at 9 p.m. Sunday (Dec. 13) on A&E. (AP Photo)

As the old saying goes, “If you like this kind of thing, you’ll like this. ” Mirroring too many other celeb-reality shows that come pledging a personal glimpse at their subjects, “The Jacksons: A Family Dynasty” is stagey, selfconscious and, most of all, selfserving on the part of its participants.

But if you’re a fan of Michael Jackson (always offstage but seldom out of mind), or even the observable members of the Jackson 5 — Marlon, Tito, Jackie and Jermaine — you might enjoy this time spent with them.

The six-hour A&E series premieres at 9 p.m. on Sunday, Dec. 13, with back-to-back episodes. The high point of those first two hours comes when Jermaine Jackson cries.

Tearfully, he recalls the dark days of 1976, when the rest of the group leaped to CBS Records while only he stayed behind at Motown, being loyal, he says, “to where we started.”

“Do you know what it is to be alone? Just to be alone?” says Jermaine, choking up. “I’m out in the streets and kids are saying, ‘We don’t want your autograph, ‘cause you’re the one that broke the group up.’”

“When you came back to the group, it was one of the best, favorable memories of my life,” says Tito as the foursome shares hugs all around.

It’s hard to believe this is really the first time Jermaine has ever expressed his hurt from that rift with his brothers, as he claims. And it’s hard to overlook the fact that, during this scene of high emotion, all of them seem carefully arranged on their sectional sofa for maximum visual effect.

Even so, there’s something real going on here. It’s a nice break from all the canned, rote stuff.

The premise of the miniseries (at least when filming started last January) seems to center on the Jackson 5, including Michael, reuniting for their 40th anniversary.

The other four brothers start planning a tour and a new album — “the best album we ever made!” Jackie crows.

They exchange lots of stock dialogue like, “I think we owe it to the fans” and, “We’re family. We’ll be the Jackson 5 till the day we die.”

They make self-pitying remarks about the way the media abuse them, for example, “Your fans will be there for you. You have that marriage with them from day one. It’s the media that tries to come between that.”

They also get on each other’s nerves. In the studio last May, Jermaine records a vocal track, then heads off to lunch. Jackie decides it’s unacceptable and erases it.

“You won’t believe what happened in the studio today,” Jermaine tells his wife back at home. “I did these vocals, I was very excited about them, and the next thing I know, they were erased.”

The first hour (which includes a sentimental, staged-for-TV journey to their childhood home in Gary, Ind.) ends with the news of Michael’s death in late June.

Even before his shocking death, it’s hard to discern from the miniseries what Michael thought about his brothers’ plans for the reunion. His involvement is apparently assumed. But he is only seen in archival footage and heard singing on the soundtrack.

“Your brother was the biggest artist in the world,” the Jacksons’ attorney, Virgil Roberts, tells them in the second episode, a month after Michael has died. “It’s put a special spotlight on you. You’re the living legacy.”

As Roberts speaks, the Jacksons’ album and tour seem to still be in the picture, at least for the sake of justifying this miniseries.

But Jermaine isn’t in the image (and his commitment to the group is called into question) when he misses the official photo shoot. He later tells his brothers he had an eye infection.

Some reunion. And four more episodes to fill.