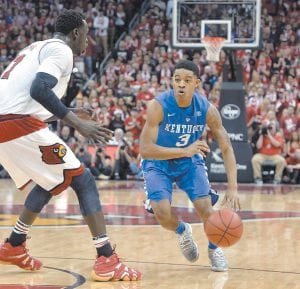 Kentucky’s Tyler Ulis brought the ball up the court against Louisville. (AP Photo)

It’s official now you can commence with the 40–0 talk and you can attach the name of ”The Unselfish Cats” to this 2014-15 UK team and more than likely the Monday after the first weekend in April you can tweak that to “The Unselfish Undefeated Cats.”

After the UK dominance of UCLA on Dec. 20, there was an NBA general manager who told Chad Ford, who himself is considered the guru of the NBA draft, that his opinion of UK was and I quote, “I’ve never seen anything like this. UK doesn’t beat you, they chew you up and spit you out.” UK didn’t exactly chew Louisville up and spit it out, but it was very apparent as the game wore on that UK was the better team and the only thing left was the final margin on the scoreboard and who had the most take downs or landed the most punches.

It was ugly basketball from the tipoff which, thanks to the worldwide leader in sports ESPN or in this case ESPN2, only those lucky enough to have tickets in the Yum Center got to see for the first five minutes because the station was showcasing that barnburner affair between IU-Georgetown. Then the light went off in the brain of ESPN’s producer/director and he switched over to ESPN News for a few minutes until the IUGeorgetown game finally ended. Once the game telecast locked in to the rest of the free world, it was another classic case of the actual game didn’t match the hype which has become too often in this regular season rivalry.

The last five years whether the regular season game has been at Yum or Rupp, it’s been a bloodbath of physicality with very few moments of pure basketball where players can feature their God-given skills. Yet, when the two teams have met recently in the 2012 and 2014 NCAA tournaments on neutral courts outside the boundaries of the Commonwealth, the games have showcased some special moments both by players’ individual physical talents and team wise.

Regardless of anyone’s individual opinion of play on the court, there are many longtime supporters on the inside of each program that really look forward to each season when this game can be put behind them and they can move on to their conference schedule and build that NCAA tournament resume to as high a seed as possible.

I know both head coaches feel that way and after the last few years’ regular season bloodbaths, you can count me in that category as well.

Problem is I’m afraid we’ve not seen the last of ugly basketball. There are basically two ways a team with marginal talent can compete to a degree against a team with superior talent like that of this UK team. You can shorten the length of the game by keeping possession of the basketball away from the superior team for long periods of time, but the modern day 35-second clock throws a clink into that theory, or you can make the game as physical and ugly as possible with constant contact from full court pressure to constant hand slaps and body checks on the half-court perimeter to bull rushing tactics in the lane and underneath the boards. In other words, hopefully your team can give up as many or more fouls and outfoulshoot the superior talented team.

Any of this sound familiar yet.

So it appears the ugly tactic is the chosen one for this year’s UK opponents or at least it has been for Texas, Providence, and Louisville. Just settle in, Big Blue Nation, and enjoy the ride and let the players and coaches deal with the cheap shots and ugly basketball and, Cal, you probably need to slide over to Nutter Center and borrow those pads and helmets you used to tweak the team practices with in recent years.

Camp Cal Is On

You think you had a rough holiday, think again. If that scrum of a basketball game that UK -UofL had Saturday wasn’t enough for UK players to deal with in the recovery process, then add another week to 10 days of Camp Cal to the daily grind. Trust me, all coaches love practices because they are in complete charge of everything plus don’t have the pressure of having to win. Players, especially college and professional players, literally hate practice, especially those full of fundamental drills.