Names on our mind’s marquee change too. Julius, Cauley- Stein, Russ and Luke give way to horse owner imaginations – Vicar’s In Trouble, Chitu, We Miss Artie and Uncle Sigh.

Question/suspense: “Who’s coming back?” and “What’s the recruiting news?”

More May calendar queries: “What ball coach job-jumped today?” … “What player got arrested for DUI after the party?” and “Who’s Calvin (Borel) riding in the seventh on Saturday?”

At the track, at the ballpark, and on to hoops series against the Hoosiers, the sporting possibilities here in Kentucky keep us on this side of the highway’s yellow line. Sane and buffered from hateful politics, pollen counts, which country the USA pledges to protect this week, and of course, Vladimir Putin’s latest mischief. 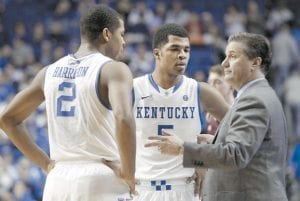 This week comes the heralded most exciting two minutes in sports. In truth, this horse race is two minutes bubble-wrapped in layers enough of televised show-off pomp and pretend, dress-up and “bring me another drink, but not that green thing!” to make one gag.

Derby day has morphed into a week of pageant then Saturday night that begs for a Patti Page epilogue: “Is that all there is?”

Today though, let us take pause for a first-week-in-May look back.

This week, a retrospective.

1. Who’s coming back to Kentucky’s 5-star hotel? Everybody almost. Aaron and Andrew Harrison were the last of eight to let Big Blue Nation know they will return.

The twins’ return leaves us to wonder if NBA draft guru Chad Ford made this call: “Both are borderline first round picks right now. If the twins declare this year, they are playing in the D-League.”

3. What could be new at Kentucky: When 40-0 is mentioned, nobody laughs.

4. Ghost of 40-0. With arguably the best assemblage of talent in college hoops ever, the pressure’s on. John Calipari may as well have a 40-0 tattoo when hoops magazines arrive in July. With this roster, Calipari has the chance to prove he’s an extraordinary coach instead of a “gonna make you rich in seven months” flimflam man with a good hair cut.

5. Kentucky will be back atop the ratings and cast anew as New York Yankees of college hoops.

6. Best of it: Alex Poythress. Excellent student makes right decision and, considering his play in March, a well-paid future during and beyond the NBA black hole.

7. Football. Spring games are now in the film room. Video to be hashed over, broken down and synthesized with the fine comb scrutiny allotted Donald Sterling’s cellphone calls.

8. Best of it for Big Blue Nation? UK could be quarterback-rich. Cream-to-top come autumn – Reese Phillips and Patrick Towles.

10. Worst of it. Defensive secondary. Was awful a season ago and didn’t look appreciably better against Towles, Phillips and Drew