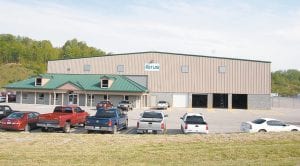 Ferus Inc. will leave behind the 42,000 square foot building seen above but will take away the $32 million worth of equipment (some of which can be seen in photo at right) it has installed at its Gateway Industrial Park location near Jenkins. Ferus announced Tuesday that it is closing its Letcher County operation “permanently” and laying off 20.

Letcher County and the City of Jenkins were left reeling this week after learning that as many as 42 men and women are now jobless after one Jenkins business shut down entirely and another severely trimmed its workforce.

The biggest hit came Tuesday morning after Canada-based Ferus Inc. announced the “immediate and permanent closure” of its liquid nitrogen plant at Gateway Industrial Park near Jenkins, resulting in the loss of 25 of the region’s best-paying jobs.

“It makes me sick to my stomach,” Jenkins City Manager Benny Mc- Call said. “They were a really good operation.”

Meanwhile, McCall said a top offi cial with Florida-based Healthcare National Marketing Inc. confirmed Tuesday that jobs were cut at the company’s new call center in Jenkins, but assured him the layoffs — believed to have affected as many as 22 employees — were made for no other reason than poor job performance.

Local officials learned of the Ferus closing shortly after the company’s founding president and CEO, Dick Brown, publically announced the closing in a release sent to The Mountain Eagle and other newspapers in the region. 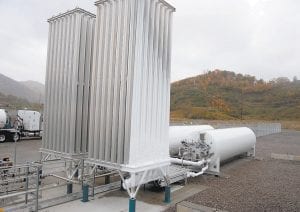 “I don’t take this difficult decision lightly given that it affects the lives of people who have made important contributions to our company,” Brown said from his office in Calgary, Alberta. Twenty workers will lose their jobs as a result of the Jenkins closing. Five other employees will be transferred to Ferus jobs elsewhere.

Brown visited Jenkins with Kentucky Governor Steve Beshear in June 2010 for the groundbreaking of the company’s $32 million plant at the Gateway Industrial Park. At the time, Brown said the Jenkins location, which represented the corporation’s first expansion into the U.S., would enable Ferus to serve a signifi- cant portion of the natural gas well drilling industry in Central Appalachia.

Brown also said at the 2010 groundbreaking that he thought Ferus was “setting up for success” here because of “the massive volumes of natural gas that are in and around this area” and because the liquid nitrogen used in the “fracking” of new wells was being transported into the region from as far as 300 miles away.

Less than six years later, the natural gas drilling industry has come nearly to a halt in southeastern Kentucky and southwestern Virginia as large producers such as EQT have abandoned the region for more productive fields elsewhere.

“In this extremely diffi- cult economic environment in the oil and gas industry there is insufficient demand for Ferus’s products and services,” says the release from Brown’s office. “The Jenkins facility, which provides liquid nitrogen to be used in hydraulic fracturing, has been proven to be uneconomic during the last five years. The rate of return available to operators is much greater in the Marcellus and Utica (natural gas) formations, and as a consequence the Lower Huron of Kentucky — which Jenkins was built to serve — has not been able to compete for the capital required to drill and complete wells.”

Jenkins Mayor Todd De- Priest and Letcher County Judge/Executive Jim Ward were officially informed of the plant closing during a meeting at the Gateway site on Tuesday afternoon.

“That’s one of the worst meetings I’ve sat through in my life,” said DePriest. “It’s sad.”

DePriest said he was told that Ferus had no other choice than to make the decision to close after the company learned that it would be at least five more years before EQT or any other drilling company would return here and resume drilling in the Lower Huron formation.

Ward said he sympathizes with the 20 employees who are losing “goodpaying jobs” from which they earned between $22 and $27 per hour. He also feels for the City of Jenkins and the financial hit it will be taking from the taxes and fees Ferus will no longer be contributing.

In August 2013, Ferus donated $100,000 to the Jenkins Independent School System to help the system provide Apple iPad computer tablets to all its students.

“ They did everything right,” said McCall, the Jenkins city manager.

Brown, the Ferus CEO, reiterated that the company’s decision to close its Jenkins operation was solely driven by market forces.

“The decision to close the operation is not a reflection on the regional management team’s abilities,” Brown said. “In fact, I am confident they effectively and successfully managed the operations to what the market would yield. Ultimately, it is just not a sustainable marketplace. We are thankful for the years of loyal service provided by the Kentucky staff and the significant contributions they have made to the company.”

The release concludes by saying, “Finally, Ferus would like to thank the Jenkins community for their warm hospitality and support.”

Before Mayor DePriest and Judge Ward met with Ferus plant manager George Wice on Tuesday, McCall had been in contact with Sherri Paules, CEO of National Healthcare Marketing Inc. of New Port Richey, Florida. McCall said he contacted Paules after hearing reports that 75 employees had been laid off from National Healthcare’s call center in Jenkins, which opened in early September.

According to McCall, Paules did say that some telemarketers — far fewer than 75 — were relieved of their duties, but only because of production issues such as the number of workdays missed.

“They are strict,” McCall said of National Healthcare’s attendance requirements. “Punctuality is a huge thing with them.”

Two telemarketers who lost their jobs last Friday told The Mountain Eagle that 12 jobs were cut on the dayshift and 10 jobs cut on the nightshift. The employees said a manager told them they were being laid off because “production wasn’t meeting payroll.”

“We found out when we came in Friday morning and we didn’t have timecards in the slots,” said one of the workers.

The two former employees said that after the layoffs the hourly pay at the Jenkins center was cut from $12 to $9.

The laid- off workers said they were classified as “fronters,” and had the duty of telephoning residents — none of them from Kentucky — and asking them to subscribe to dental insurance plans offered by Delta and Careington. The fronters in Jenkins would then turn the calls over to “closers” from National Healthcare’s Florida office whose job it was to complete the sale.

According to one of the employees, some “fronters” were kept even though they were credited with far fewer “transfers” to “closers” than did those who were let go.

“One minute they would tell you that you were doing so well, then the next minute they are running everybody out of there,” one of the employees said.

Paules could not be reached for comment before presstime on Tuesday.